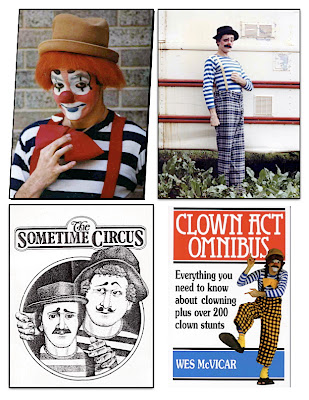 It's been great seeing pictures of RIngling's 1978 Blue Unit clowns. I was especially tickled to see a picture of my friend Allan Tuttle, so here's a few more of him. The first is from '78 when he was on the Ringling show. The other is from 1983, when he had changed his look and adopted the clown name Fritz.

I met Allan shortly after he left the show. He and a Red Unit alumni, Marty Sherman (aka Dr. Professor) were working around the Chicagoland area as "The Sometime Circus". Marty and his wife Linda moved to Canada, where the last I heard he was writing science fiction and teaching the neighborhood kids to juggle. Allan and his wife Tracy live in San Diego. Allan and I did a little street performing together in Australia in the '80's, as well as a season together at the Schlitterbahn water park in Texas, and he also spent a few years as part of the Circus Circus clown alley in Las Vegas. He was recently clowning for Circus Circus in Reno, and is now going to school.

I really hope you get to meet him one day; he's a true mellow fellow and one of the nicest people I know. I doubt if there's a person who's met the dude who doesn't like him!

P.S. Oops-forgot to include that the last one is the cover of a well known book of "clown skits".