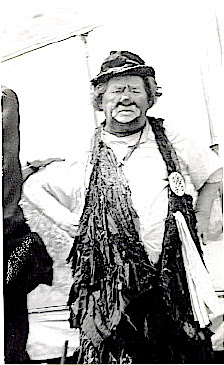 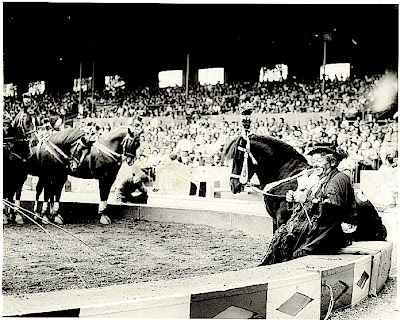 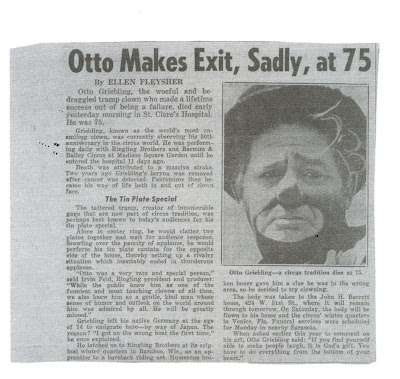 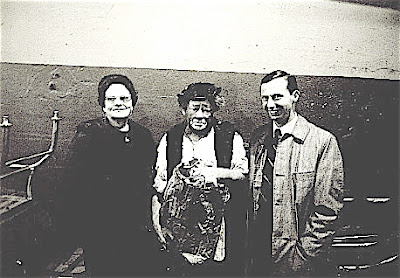 
I was born and raised in Peru, IN and lived there until I was 19 ( I'm now 61). Almost every year I went with my aunt Joann to either Indianapolis, Chicago and sometimes Fort Wayne where RBBB was playing (there was no red,blue or gold units in those days). We would visit with Otto before and after the show. I was lucky enough to get invited into clown alley where I met some of the greatest clowns of all times like Freddie Freeman, Lou Jacobs, Gene Lewis, Emmett Kelly, Paul Jung and many many more who's names escape me right now. This would have been in the early 1960's.

Otto always got me a small chair and I would set next to his trunk. We would talk about family and general stuff. He never talked much and this was way before he had his throat operation. When the show was nearby Peru, usually Indianapolis or sometimes Chicago, he would come to Peru for a few days. I have a few photos of Otto when he was in Peru, but none without make-up. The Peru Tribune and other local agencies always wanted to see him in make-up when he came to town. I'll look through my files and see if I can scan some photos and send them to you. I know I don't have any videos. my wife and I visited Otto and his last wife, Anne when the show was playing the old Madison Square Garden in New York just before he died. I've lost trace of Anne and don't know if she is still alive. They had a house in Sarasota and if she is alive, she has to be up there in years.
Posted by Pat Cashin at 7/18/2007 10:34:00 AM

Annie Griebling passed away a few years ago. I believe she moved from her house in Venice/Sarasota and in her last few years lived in Ocala Florida.