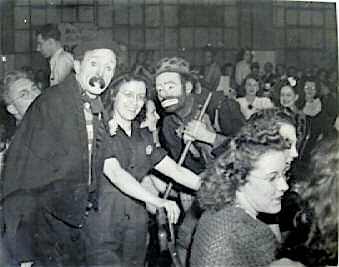 The unusual pairing of Emmett Kelly and Freddie Freeman. Emmett was Otto Griebling's partner on the Cole Bros. Circus in the 1930s, Freddie was Otto's partner on Cole in the 40s, joined him in his move to Ringling in the 1950s and stayed through the late 1960s.

At first I thought that this was taken during a Ringling indoor come-in, but that can't be right since there doesn't seem to be any children present.