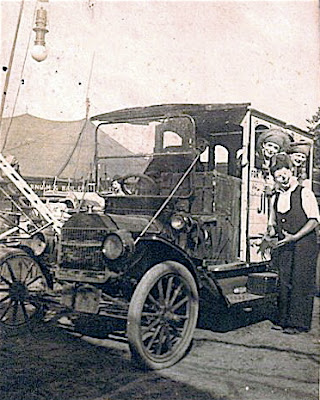 Members of the 1915 Clown Alley of the Barnum & Bailey Circus and a prop Jitney Bus.

This makes me wonder if this is the exploding Jitney Bus described in the book CIRCUS LURE AND LEGEND and if any of the clowns pictured here are the elusive Buck Baker.

Baker created several brilliant gags based around automobiles and motorcycles in the early part of the 20th century, many of which were never recreated. As well known as he was for his time, I have never seen a clear photo of Mr. Baker.