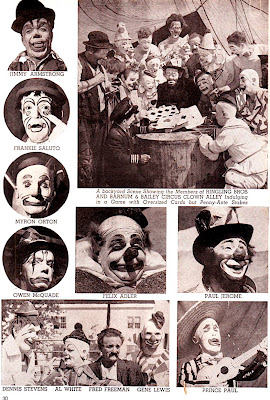 The 1956 Clown Alley of the Ringling Bros. and Barnum & Bailey Circus, the final season under canvas.

I don't believe that Felix Adler was actually in the show that year, he Emmett Kelly and Otto Griebling were part of the AGVA strike and took part in the AGVA sponsored indoor shows that day and dated the circus that year.

The Ringling show closed early that year due to pressure from the Teamsters. Emmett only returned to Ringling once more, to speak to the students at Clown College in 1977.

I remember that day. I was the bus driver that year-- Emmett was leaving, and Lou walked him out to the exit where they stopped for some last minute conversation. As they stood facing each other making small talk, there was a steady stream of students on both sides-- one would walk up and stand between them, and another would walk up in the front and take a picture-- don't know how many there were, but it would be interesting if anyone from CC77 who was in that line still has a copy . . .

Lou Jacobs was on the Polack Show in '56, with the likes of the Sherman Brothers, Rudy Docky, Harold Simmons, and Jackie Gerlich. There's a great picture of Lou, standing over his car and daughter Lou Ann (2 years old @ the time) in the '56 program.