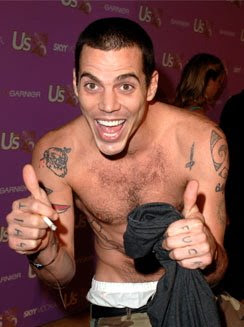 Fellow Clown College class of '97 alumni Steve-O, star of MTV's Jackass and Wildboyz was reported in the media last night as being on 24-hour "suicide watch" in in the psych ward of an L.A. area hospital.

I spoke with him last night (isn't there better phone security in L.A. area hospital psych wards? I haven't spoken to Steve-O in 10 years! How the heck did I get through?) and he sounded absolutely fine.

He's just going through a rough patch after a break up and some folks close to him chose to err on the side of caution based some emails that he sent out over the weekend.

So, don't believe half of what you read today in the papers. Steve-O is fine and will be back to stapling his testicles to things again in no time ; )

Pat,
That is a classic. I am going to scotch tape it in "The GSOE good old day's clown book", that I am making for my grandchildren. I am going to put it right next to the picture of Tuba, fight for his life, defending America from the Star Troopers.
Wade Burck

Pat,
I might also suggest that Steve took that Peter Pitovsky "let's see if I can kill myself" deal to a new level with the staple gun.
Wade Burck

pat do you have any pics of him in makeup?