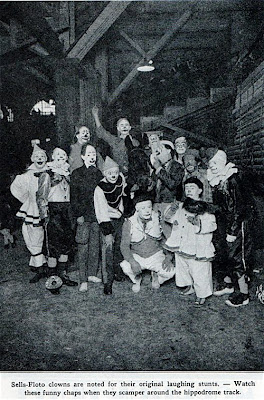 Just because this photo appeared in the 1931 Sells-Floto program it doesn't necessarily mean that these are actually the clowns that appeared on that show that year.

American circus programs from that era are notorious for reprinting photos from other shows (usually Ringling/Barnum) in their programs.

Exactly! Buckles & I discussed the fact that different shows had the same owners, therefore many programs, were almost carbon copies of each other.

The look of the clowns is wonderful.
I love the fright wigs and caps.
Bet it was a very fun show!
Tommy