CLOWNING PAYS OFF FOR HARMON
By Philip K. Scheuer

"The way I feel about life is, just keep laughin'!"

At 36, on the way to the bank, Larry Harman can afford to. He not only has world rlghts to Bozo the Clown; he practically IS Bozo the Clown. In a decade Bozo has gone from phonograph records to television to in persons; soon he will be in feature pictures. Beyond these looms Bozoworld—many Bozoworlds, all over the country, but the first one right here in north-western Los Angeles. 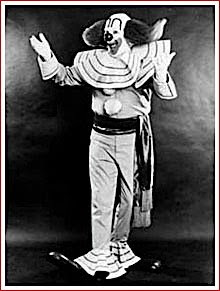 Like Bozo, Harmon never stops talking a blue streak. In a single hour with me he imitated not only Bozo in English but Bozo in a half-dozen other tongues; he also became Butchy, Elvis the talking dog, Slippery Bly the international spy, Wacko Wolf, Short Biggy and Big Shorty and two newcomers to the Bozo family, Belinda and Super Sniffer. He still finds time to be the voice of Bozo on TV—and most of the other characters as well.

"Today," he said, lapsing back reluctantly in to Larry Harmon. "I have over 60 Bozos in the U.S.A. and over 12 throughout the world—and I trained 'em all! Bozo, on 35-mm. film and in color where there is color, is carried by 205 TV stations worldwide. We have made 104 half-hour shows and right now we are on the second 104. But our big aim is features—family entertainment! One is already on the drawing boards and two in the story-planning stage. They will cost from $600,000 to $1.2. million each."

An erstwhile musician and actor, Harmon heard in 1950 that TV was interested in Bozo, who in his present incarnation was created some 20 years ago by CapitoI Records; "Bozo at the Circus" was the first album and Bozo's picture was on it Harmon was advised to go out and cut a record of his own; if his voice sounded more like Bozo than his nearest rival he'd get the job in the pilot film. P.S.: He did.

"Four years ago," he declared, "I obtained the rights from Capitol and started making the cartoons myself. I borrowed $1 million and paid it back in two years. We're out at the old California studios and we now have about 200 people working for us. We started with 125."

The 60 U.S. Bozos will appear with the theater features in the various cities. "Think what that will mean!" Harmon cried. "The live star of a movie, in person, at each showing!"

He has also cleared the cartoon rights to Laurel and Hardy. They should be on your home screen by 1962 and in the theaters soon after. Harmon will be the voice of Stan Laure—natch. The only surprise is that he won't play Ollie too. Are you laughin'?

Pat, A very interesting article,...
May I ask where this was found and if you have the original.
Hope you can tell me.
Thank you
Tom