THE NOODLE FAMILY: It's Elmo's World, the Rest of Us Just Live In It!

Kristen Chenoweth as Ms. Noodle. There is another Noodle sister, Miss Noodle played by Sarah Jones.

The goofy-acting human characters Mr. Noodle, Mr. Noodle's Brother Mr. Noodle, Ms. Noodle and Miss Noodle all appear in Sesame Street 's "Elmo's World" segments. The characters, who do not speak, attempt repeatedly to demonstrate a particular activity related to the episode's topic, while offscreen children verbally correct their failures.
The Mr. Noodle segment typically begins when Elmo has begun to think about a particular topic, when it suddenly occurs to him to consult with Mr. Noodle. Elmo will interject, "Let's ask Mr. Noodle!" and proceeds to his disobedient window shade, who Elmo eventually coaxes open to reveal the member of the Noodle family waiting outside the window. Mr. Noodle is then asked by Elmo how to do something or how to use something.
Initially, the Noodle family member(s) will, in a vaudevillian manner, ineptly demonstrate how to perform a task, play with a toy, etc. in a clueless yet playful fashion until eventually the correct demonstration of the topic is achieved. In episode #1840, for example, Mr. Noodle is asked to jump over an object. He initially crawls under it, and the audience tells him he has made an error. He then 'uses his noodle' and the advice to come to an epiphany of what jumping is and then jumps over the object in a wild fashion. In many Elmo's World episodes, the Mr. Noodle (or whichever Noodle is outside the window) is revisited during the segment, and is again seen during the segment's closing song.
The style of Mr. Noodle, et al., is evocative of slapstick physical comedy from film of ages past. (See Charlie Chaplin, Laurel and Hardy, Harold Lloyd etc.)
Mr. Noodle is portrayed by Bill Irwin. Mr. Noodle's Brother, Mr. Noodle (often referred to as "the other Mr. Noodle") was played by American actor Michael Jeter until his death on March 30, 2003. The Noodle brothers' sister, Ms. Noodle, is portrayed by Kristin Chenoweth, a noted Broadway singer and actress. A second sister, "Mr. Noodle's Other Sister Miss Noodle" is played by playwright and actress Sarah Jones.

I would very much like to be Mr. Noodle's cousin, Mr. Noodle.
Call me. Let's do lunch! 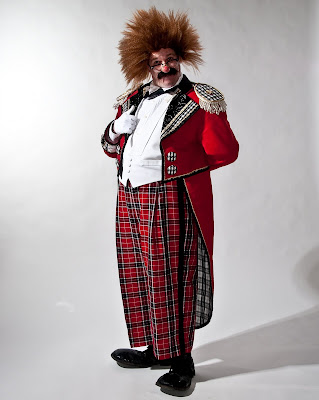 I was always under the impression that Michael Jeter was the original Mr. Noodle and subsequently replaced by the amazing Bill Irwin.
Bill is a wonderful person as well as an unbelieveable talent. I think it was at Dick and Tiffany's "Noses Off" that I first met Bill (and David Shiner). I saw him across the floor and wanted to meet him so over I went and said, "Excuse me, Mr Noodle?! Bill face broke into that wonderful smile and he said, "Guilty". Both Bill and David Shiner, major talents to be sure are also wonderful people.
Must tell this little story...
somewhere around 15 or so years ago I'm at a RBBB show (I knew David Larible by this time) after the show I was down by the arena floor and saw Bill, with his young son in arm, David Shiner and David L. I very much wanted a photo and in the spontanaiety of the moment I called out their names and said, "I'm a friend of Barry Lubin's , can I take your picture?"
They posed (bless them); the photo came out great and I eventually got 8x10's to all of them.

You know I keep thinking that perhaps the beatitudes should have included one more, something like, blessed are they that give us joy for they shall be blessed as well.