THE REVIEW IS IN! 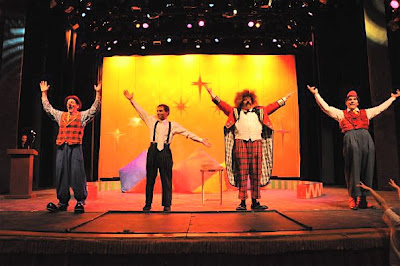 Just writing to say that myself and fellow clowns Keith Crabb, Brian Raboin, Brian's wife Noelle and daughter, Giavanna went to see "Circus Silliness: The Clown Symposium" in the Baltimore area this past Sunday. The first half of the show the performers were all kids, with some familiar last names: Ethan and Sophia Rosman (Recently of "Ellen Show" fame), Grace and Genevieve Lohr, and Veronica, Vonya, Valeria. Vayla, and Viahna LaMarra.
Sadly, missing from the cast was Shane Cashin. Shane was busy representing his school in the finals of a prestigious Spelling Bee contest! Congratulations Shane!

And all of the kids did a wonderful job in the show.

Two year old Giavanna was riveted throughout and so was I.

The second half performers were Pat Cashin, Mark Lohr, Michael Rosman, and Andrew Scharff. They did a first rate job and all worked well together. Pat's new character looks great! And his work with Andrew was very polished. Andrew's contortion was really cool. Mark did some wonderful physical comedy! And Mike was really great. His diabolo routine was the funniest I have ever seen (reminiscent of the style comedy of Andy Kaufman). Great job guys! Thanks for the entertainment and thanks for hanging around after the show (special thanks to Pat for making the extra effort to win over Giavanna...she was waving to you from the window as we left)!
Chris

Thank you, Chris! Your check is in the mail ; )

"One of these things is not like the other..."

And how do we style, Michael Rosman?