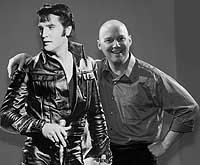 Way to go Jay! I applaud you. I am also green with envy. Let us know if you archive this show. AKA "Bootleg CD's" for sale.