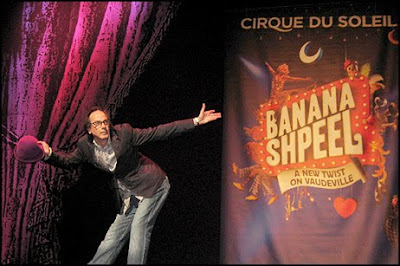 With a jokey name and a whitebread spelling of “spiel” — “Banana Shpeel: A New Twist on Vaudeville” — a new vaudeville show will be landing on Feb. 11 at the Beacon Theater in Manhattan, originally conceived as a sumptuous mecca for vaudeville acts.

But on Wednesday, when Cirque du Soleil unveiled the details of the 33-performer show that could be its first permanent presence in New York, the Montreal-based circus empire was careful to distance itself from bumps, grinds and sleaze.* “This is not a nostalgic look into the past,” said Daniel Lamarre, president of Cirque. “It is, as the title says, a vaudeville show with a twist.” He said the production budget would be $20 million.

David Shiner, the show’s writer and director, whose Broadway show with Bill Irwin, “Fool Moon,” won a special Tony Award in 1999, said: “It will be a family show with a simple and compact narrative,” featuring short, fast-paced comical variety performances in which choreography, dance and acrobatics play a part.

With that, 15 performers from the show took the stage of the opulent 2,829-seat 80-year-old theater (refurbished last year to the tune of $16 million), to tap, sing and cavort for a 15-minute preview.

Mr. Lamarre said the show was open-ended, and could tour at other venues across the world, returning to the Beacon as an annual presence if popularity warrants. “We see this as an entry for Cirque into proscenium venues like the Beacon,” he said, “and we see it as our entry into comedy as well.” The show, created for the Beacon in Montreal, is to be in tryouts in Chicago from Nov. 19 through Dec. 31 at the Chicago Theater.

The company has put on hold its longstanding plans to build a New York City space that would give it a permanent home in Manhattan. Cirque has announced, in addition to the recurring Beacon show, that it will establish a four-month summer extravaganza in 2011 in Radio City Music Hall as a warm-weather counterweight to the “Christmas Spectacular,” populated with acrobats and clowns but no Rockettes.

And “Wintuk,” Cirque’s $20 million annual winter holiday show at the WaMu Theater at Madison Square Garden, is expected to continue.

“It would be our dream to have our vaudeville show in the Beacon year-round,” Mr. Lamarre said.

* Exactly when did vaudeville ever feature the kind of "bumps, grinds and sleaze" that Cirque would need to carefully distance itself from???

Since it was burlesque. That's when. Who needs distinctions between artforms where variety theater is concerned? Who expects accuracy in the New York Times?

Accuracy is eventually expected by a specialist as Glenn Collins, but it can happen.
But I don't think this is a problem. The problem is, as always, the Cirque's emphasis on the distance from the "nostalgic" imagery and the traditional world.
They have only to thank God if their company can still benefit of an artist as David Shiner, whose traditional background ans sensibility can give them successes as "Kooza" and, hopefully, this one.