Art 'Jolly' Petri made sure laughter was best medicine
By Amy Rabideau Silvers of the Journal Sentinel
Posted: Aug. 28, 2009 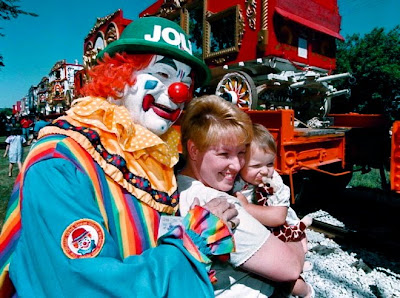 Art Petri, a.k.a. Jolly the Clown, poses with Jodi Geboy (center), of West Allis, and her daughter, Sara, for pictures beside the circus train during a stop in Waukesha in 1998.

When people called Art Petri a clown, they meant it in the best possible way.

Petri's other public persona was "Jolly the Clown." He took the name in honor of his friend, relief pitcher Dave Jolly of the Milwaukee Braves, who died in 1963.

Long the clown coordinator for the Great Circus Parade, he was one of three clowns honored at the parade this year, said his son, John Petri. Art Petri was allowed to sit in the VIP stands. He came in costume.

He was involved in bringing the World Clown Association to Milwaukee for its 1989 convention. He taught hundreds the serious business of clowning around, also helping to found four clown "alleys," or clubs.

Arthur A. Petri died of natural causes Wednesday. He was 82.

His father, Arnold, who played Santa Claus for more than 60 years, apparently had no sense of humor about unions.

The younger Petri later worked at the same bank where his father had worked.

After a layoff, Art Petri began in security at First Wisconsin, then worked for its credit card department. He also became president of the same union his father wouldn't join.

His path to clowning began in the mid-1950s - he fit the costume at his Moose lodge - but medical problems clinched the deal. He was depressed after losing most of the vision in his left eye and surgery to save his vision in the right eye. He struggled with a lung condition that required surgery. His doctor had advice.

The doctor also encouraged Petri to blow up balloons for respiratory therapy.

Petri gave up on attempts to enter politics. Instead, a clown was born.

Petri became known for his balloon work, creating a repertoire of nearly 200 animals and shapes. He self-published a book, "Balloonology," for the course he taught at Cardinal Stritch University and the University of Wisconsin-Milwaukee.

Petri went semi-pro in 1963 with his Jolly the Clown Enterprises, later AA Entertainment. He played big venues - Summerfest and the Wisconsin State Fair - plus plenty of charity outings. He was the only American clown invited to perform at the 1967 World's Fair in Montreal.

Petri was a longtime volunteer and board member at the Badger Association of the Blind and Visually Impaired. Like his father, he loved playing Santa, including in the Milwaukee Holiday Parade. One memorable year, the Santa float was built too high for a downtown overpass.

"He had to duck when it went under the overpass," his son said. "They built the float shorter the next year."

Petri was the first-ever Ronald McDonald in Milwaukee, his son said. Jolly the Clown worked his last event July 4 in Brookfield.

"He was hoping to be in the parade, but he just couldn't walk," John said. "So he was at the park there."

For Petri, clowning was about something more important than money.

"Not everyone is cut out to be a clown," he said. "You have to have the heart of a clown. You have to project good in the world - even when you're not feeling well, you can make someone else feel better."

Visitation will be from noon Sunday until the funeral service at 3 p.m. Both will be held at Wisconsin Memorial Park's Chapel of the Flowers, 13225 W. Capitol Drive, Brookfield.

Art took me under his wing when I was 12 years old and began teaching me the skills of make-up, balloons, and magic and provideing me with gigs at the Bay Shore Mall and Church Halls to begin my days in front if audiences and fulfilling my dreams of becoming a Ringling Bros. and Barnum and Bailey Circus Clown.

Art was a very hard working man with a heart of gold. He began more clubs in Milwaukee for all kinds of people who wished to play in the art of clowning.

He was an amazing person and will be missed by those who knew him from Circus World Museum, The Great Circus Parade, and his Christmas parade Ho ho ho's...