Larry Simon Gelbart (February 25, 1928 - September 11, 2009) was an American comedy writer and playwright with over sixty years of credits. 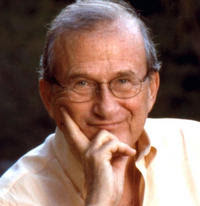 Born in Chicago, Illinois, to Jewish immigrants Harry Gelbart ("a barber since his half of a childhood in Latvia") and Frieda Sturner, born in the farming village of Dombrowa, Poland. Gelbart began as a writer at the age of sixteen for Danny Thomas' radio show during the 1940s and also wrote for Jack Paar and Bob Hope. On 1950s television, he worked for Sid Caesar on Caesar's Hour, along with the other gifted comedy writers Neil Simon, Mel Brooks, Woody Allen, and Carl Reiner.

Larry Gelbart wrote the long-running Broadway farce A Funny Thing Happened on the Way to the Forum with Burt Shevelove and Stephen Sondheim in 1962 and he collaborated with Shevelove on the British movie comedy The Wrong Box.

In 1972, Gelbart was one of the main forces behind the creation of the television series M*A*S*H, writing and producing many episodes until leaving after the fourth season.

Gelbart in 1982 co-wrote the Oscar-nominated screenplay for Tootsie. He also wrote the screenplays for Oh, God! starring George Burns, Blame It on Rio with Michael Caine and the 2000 remake of Bedazzled with Brendan Fraser.

Gelbart's other Broadway credits include the musical City of Angels, which won him the Drama Desk Award for Outstanding Book of a Musical and an Edgar Award, and the Iran-contra satire Mastergate, as well as Sly Fox.

In the early 1960s, he uttered the now-classic line, "If Hitler is alive, I hope he's out of town with a musical."

In 1997, Gelbart published his memoir, Laughing Matters: On Writing M*A*S*H, Tootsie, Oh, God!, and a Few Other Funny Things.

I have met Larry Gelbart many times at charity concerts for AIDS Project LA and The ACTORS Fund. There is not a nicer guy in LA. He loves to tell and listen to stories. He is just the best.

Oh hell... I just saw the "Memoriam" in your header. So sad... we lost a really good one today. RIP