Edited from an article entitled The Pope, The Clown and the Cross which appears in the current issue of American Catholic... 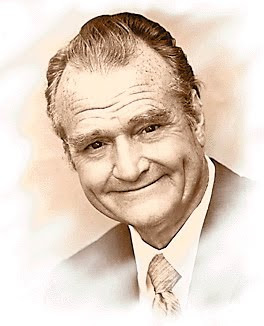 In 1957 comedian Red Skelton was on top of the world. His weekly comedy show on CBS was doing well. He had curtailed the drinking which had almost derailed his career. Not too shabby for a man who had started out as a circus and rodeo clown and who was now often called the clown prince of American comedy. He and his wife Georgia had two beautiful kids: Richard and Valentina Maria. Then the worst thing in the world for any parent entered into the lives of Red and Georgia Skelton: Richard was diagnosed with leukemia. Unlike today, a diagnosis of leukemia in a child in 1957 was tantamount to saying that Richard was going to die soon. Red immediately took a leave of absence from his show. CBS was very understanding and a series of guest hosts, including a very young Johnny Carson, filled in for Skelton during the 1957-1958 season.

Red and his wife made two decisions. First, they decided not to reveal to their son how ill he was; if worse came to worst they wanted him to enjoy the time he had left. The boy’s leukemia was temporarily in remission and outwardly he appeared healthy. When the boy saw “The Last Days of Pompeii” on TV and was fascinated by it, his mom and dad made their second decision. They were going to take him and his sister to Europe so the boy could see Pompeii and other parts of Europe and the world, and to allow the parents to consult with foreign physicians and also to conduct a pilgrimage for their son.
After they returned to the States, the leukemia came out of remission and took its dreadful course. Richard underwent treatment at the UCLA medical center. His parents were constant visitors to see him. Both father and son, as detailed here, did their best to keep up the spirits of the other children undergoing treatment by telling jokes. On one occasion Red Skelton sat up most of the night with a young girl who was undergoing surgery and kept reassuring her that everything was going to be all right, as it turned out to be in her case.

“The doctor was as gentle as he could be when he told me there was a good chance I had something that would mean amputating my leg. I remember crying for hours that night. The night before surgery I was very scared. My mother was at home with three small children and I had a difficult time falling asleep. When I finally gave in and allowed sleep to take over, it wasn’t for long. I awoke to find my friend Richard’s father asleep in the chair next to my bed. He woke up soon after I did, and in a very gentle voice kept telling me it was going to be ok. I just had to believe. There he stayed for most of the night. I would sleep and waken, and he would sometimes be asleep, other times he’d smile and comfort me.

Surgery went well, and my leg wasn’t amputated, but I was in and out of surgeries, casts, and the hospital for the next two years. Richard passed away from leukemia the second year, but has lived on in my heart and memory. His father became my hero as I watched him on television, then and in later years. For during the time I knew Mr. Skelton and his son Richard, I only saw their courage, compassion, and tender hearts. I saw a man who was “in character” to make the children laugh and forget their illnesses, but I also saw a very gentle man who was not “in character”, as he sat by the bed of a fatherless 11 year old. Setting aside his own fears, or sadness, Red Skelton, the clown who entertained millions during the early days of television, made sure I was able to face a scary situation with the hope it was going to be ok.”

I find this remarkable. Dealing with the approaching death of his own son, Red Skelton found it within himself to keep up the spirits of other children. I guess he really meant it when he said, “God’s children and their happiness are my reasons for being”. In the years to come Skelton would become a major donor for charities for sick kids, and would also assist children through his establishment of the Red Skelton Foundation in his hometown of Vincennes, Indiana.

The complete article, which focuses on Richard's faith and his pilgrimage, is available here.

Wonderful story...I'm sure you know that Red's father was a clown with Hagenbeck & Wallace...and that the movie studio hired Buster Keaton to give him advanced training in physical comedy...society could use a good dose of his "sweetness" and "warmth" in today's comedy.

Thanks Pat... sometimes I need to be reminded why we are all here.