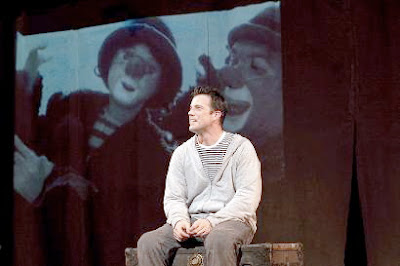 True, poignant tale of a child circus performer
By Howard Shapiro
Inquirer Theater Critic
.
To understand the power of the stage, all you need do is get to the Suzanne Roberts Theatre to see the talented, endearing Lorenzo Pisoni in Humor Abuse, his one-man master stroke about growing up a clown.

It's about pratfalls and popping out of steam trunks, about tumbling repeatedly down a flight of 15 stairs, and juggling fiberglass bowling pins that rip your skin, about balancing hats on your nose or abruptly flipping yourself backward. And even with all that tomfoolery, Humor Abuse emerges as the most poignant piece I've seen in some time.

Pisoni - 32, tall and kinetic, with movie-set good looks and a smile that doesn't flash as much as radiate - has won every kind of Off-Broadway award for Humor Abuse, which he developed with director Erica Schmidt. It played last season at the Manhattan Theatre Club and opened the Philadelphia Theatre Company season Wednesday night.

The one-act is the true story of Pisoni's life as a circus child with circus parents, the founders in 1975 of San Francisco's Pickle Family Circus. An original clown of that troupe - credited with renewing an American circus tradition and influencing Cirque du Soliel - was Bill Irwin, now a treasured theater artist (twice on Philadelphia Theatre Company's stage), and also Pisoni's godfather.

For 25 years until he stopped performing, Pisoni's father, Larry, remained a silent clown whose self-imposed demands in the service of humor broke bones all over his body. As his son tells it, the elder Pisoni nearly killed himself for laughs.

That's one form of the humor abuse referred to in the show's title. The other is more ironic, and a little unsettling. From Pisoni's infancy, his father saw him as a circus performer. The boy made his debut when he was 2 years old. A heart-tugging moment comes early in the show when Pisoni strikes a performance pose; the exact same image of a preschool Pisoni appears on a tattered white sheet that serves as a stage-rear curtain, behind him.

And so it went for little Lorenzo. At age 6, he signed an actual contract to become his dad's partner. By age 11, he was touring the country and Japan with his own act, no parent in sight. Ever wonder what it's like to be "the other" - someone who grew into a world completely different from yours? This show answers the question by presenting the experiences of one of "the others."

Humor Abuse is bittersweet - but never bitter to the point of complaint or sweet to the point of cloying. You could call it Lorenzo Pisoni's tribute to his dad - one that looks deep to reveal an almost shocking intensity about laughter.

"I can't do it!" little Lorenzo cries after trying and failing to learn a stunt. "You can't do it . . . yet," his father replies.

Well, he can do it now - all of it. The routines that pepper the show are deft; is tripping over his feet merely an alternative way for Pisoni to walk? (It apparently was for his dad.)

Pisoni is funny, fluid, and fully in the moment when he's clowning. But the real impact of Humor Abuse comes when he returns, repeatedly, to play himself, the boy who increasingly wants the opposite of what other kids want - to run away from the circus.

He finally does that, landing in high school, then graduating from college, and embracing a broader kind of performance: He was memorable in last season's Broadway revival of Equus and is a current regular on TV's All My Children. The grass may seem greener outside the circus ring, but Pisoni is his father's son. His heart is open in Humor Abuse, and you can almost hear the ringmaster calling to its beat.