KOKO THE CLOWN: Out of the Inkwell 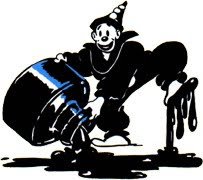 Koko the Clown was an animated character created by animation pioneer Max Fleischer. The character originated when Max Fleischer invented the rotoscope, a device that allowed for animation to be more lifelike by tracing motion picture footage of human movement. To test out his new invention Fleischer photographed his brother Dave in a clown costume. After tracing the film footage amounting to some 2,500 drawings and a year's work, Koko the Clown was born. Using this device, Max Fleischer was able to secure a contract with the John R. Bray Studios, and in 1919 they began Out of the Inkwell as an entry in each monthly in the Bray Pictograph Screen Magazine released through Pararamount (1919-1920), and later Goldwyn (1921). Aside from the novelty of the rotoscope, this series offered a combination of live-action and animation centered on Max Fleischer as the creative cartoonist and lord over the clown. The clown would often slip from Max's eye and go on an adventure, or sort or pull a prank on his creator. Fleischer himself wrote, produced, co-animated and directed all the early shorts

At first the character had no name and was known simply as "The Clown," or "Fleischer's Clown." The series was very popular and in 1921, Max and Dave Fleischer formed their own studio, Out of the Inkwell Films, Inc. Their films were distributed through the States Rights method through Warner Brothers, Winkler Pictures, Standard, and finally The Red Seal Pictures, Corporation. The "Clown" was named Ko-Ko in 1923 when Dick Huemer came to the studio as their Animation Supervisor, and it was at this time that the canine companion, Fitz was created to share the mischief. Heumer also redesigned the "Clown," and set the drawing style that made the series famous. The illustration at the heading is an example by Huemer.

In the films produced from 1924 to 1927, the clown's name was hyphenated, "Ko-Ko." The hyphen was dropped due to legal issues associated with the new association with Paramount beginning in mid 1927 following the bankruptcy of The Red Seal Pictures Corporation. "Out of the Inkwell" was also retitled for Paramount as "The Inkwell Imps" and continued until July, 1929, ending with "Chemical Koko,". "The Inkwell Imps" series was replaced by Flesicher's new sound series, "Talkartoons".

Throughout the 1920s, the Fleischer studio proved to be one of the top producers of animation with clever humor and numerous innovations. In 1924, Fleischer decided to go a step further and introduce a new series called Ko-Ko Song Car-tunes, sing-along shorts (featuring "The Famous Bouncing Ball"). These early cartoons were actually the first films ever to use soundtracks (two years before The Jazz Singer and three years before Steamboat Willie). These sound shorts received limited distribution through the 36 theaters owned by The Red Seal company, which became defunct shortly before the sound era officially began. While the last KOKO films were being produced, the Fleischers returned to producing sound cartoons with a revival of the song films named ["SCREEEN SONGS"], which were released to theaters starting in February, 1929. Throughout this transitional period, the Fleischer Studio continued to produce a number of innovative and advanced films between 1929 and 1933.

In 1931, Koko was taken out of retirement and became a regular in the new Fleischer Talkartoons series with costars, Betty Boop and Bimbo. Koko's last theatrical appearance was in the "Betty Boop" cartoon, "Ha-Ha-Ha" (1934), a remake of an "Out of the Inkwell silent, "The Cure" (1924). Koko's first color appearance was a cameo in "Toys Will Be Toys,"(1949),one of the revived "Screen Songs" series produced by Famous Studios. The colorized version of Koko also made a cameo appearance in the ending scene of Who Framed Roger Rabbit.

In 1958, Max Fleischer set out to revive Out of the Inkwell for television, and a series of 100 color episodes were produced in 1960-1961 by Hal Seeger using the voice talents of Larry Storch.