GLEN "FROSTY" LITTLE: From the Times-News

He kept them laughing: Burley resident was key part of 'Greatest Show on Earth'

BURLEY — Reactions to the recent passing of a famous circus performer just prove the saying that everyone loves a clown. 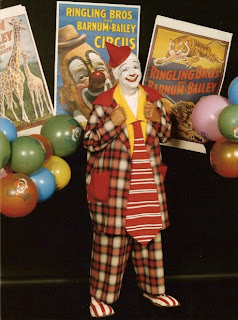 Former Ringling Bros. and Barnum & Bailey clown Glen “Frosty” Little, 84, died Tuesday in Kimberly.
“I already miss him like crazy,” said Little’s wife, Pat Little, who described the man under the Ringling Boss Clown makeup as extremely kind and loved by people around the world.
Fans’ love for her husband kept Pat’s phone ringing Wednesday with calls from around the world as the news of his death spread.
The Littles settled in Burley after Glen’s retirement from “The Greatest Show on Earth” 19 years ago. But he didn’t exactly hang up his nose — instead, he settled in teaching another generation of clowns how to make people chuckle.
Clown Tricia “Priscilla Mooseburger” Manuel, who lives in Maple Lake, Minn., worked under Glen for several years at the Ringling circus.
“Frosty was a great clown, but more importantly he taught us all to be great clowns,” Manuel said. “His purpose was to take young clowns and to push them to the front of the spotlight.”
Manuel said many of the old-time circus greats learned from Glen, who was inducted into the Clown Hall of Fame in 1991.
He received his Master Clown title from Ringling while Manuel performed with him in the 1980s. Manuel worked with him again when she opened Mooseburger Clown Arts Camp.
“He was the first person I called,” Manuel said. “I was so proud to have him be a part of my staff.”
Glen was tough, she said — after all, clowning around was his life’s work.
“He made sure we toed the line,” Manuel said. “... Most of all he wanted us to have respect for the show and to know our place in it. The show always came first. That was important.”
Manuel said Glen was able to make a successful transition from a circus clown performing in front of thousands of people to a hometown clown performing in someone’s living room.
Bruce “Abernathy D’ Clown” Chenoweth of New Plymouth worked with Glen writing gags for his clown partner, Ann “Twinkles” Chenoweth.
Ann Chenoweth remembers Glen as an old-school clown and “a very nice man.”
Glen passed along gags to the Chenoweths, including one tricking the audience to think they’re about to get doused with a water bucket really filled with confetti.
“His basic clown skills that he taught were tremendously valuable and his makeup was magnificent,” Bruce Chenoweth said.
Pat Little, who enjoyed a 41-year marriage with her husband, said that he above all loved to joke with people.
“I lived to make him happy and he lived to make me happy,” she said. “After he retired he’d play tricks on me and then I’d get him back. There will never be another one like him.”
Red Skelton never forgot him at Christmas, Pat said, and actor Iron Eyes Cody adored him.
“He was so well loved,” Pat said. “I don’t know anybody who didn’t like Frosty.”
Laurie Welch may be reached at lwelch@magicvalley.com or 677-5025.

Frosty was my first "official" clown portrait during a Felix Adler Tent coffee and cake (later dubbed "Sugarfest" by Barry Lubin) in the early '80's. He had coffee in one hand and cake in the other when I asked if I could take a head shot. He readily agreed and I got one of my very favorite Clown portraits, Frosty all the while holding on to his coffee and cake.
Years later at the CFA Convention in Ocean City, MD, he pulled Diane out of the crowd to demonstrate some of his teaching techniques. We treasure that time and the photos we have. He was a dear man and a genuine Classic Clown.