THIS SHOULD ANSWER A LOT OF QUESTIONS... 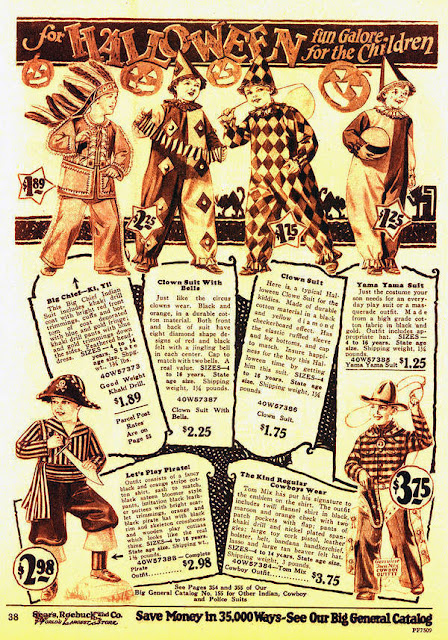 I was told by Booby Kaye the term came from the "pajama costume" that many clowns wore in the early days. It was later shortened to the word yama. This seems to be true according to this ad.

Judging by the reference to Tom MIx in the cowboy outfit, this ad was from the early 30's. Imagine what prices you would need for one of these outfits today. The yama-yama costume style predates this ad by quite a bit.

Do a Google search for "yama-yama clown" and click on the link for Encyclopedia of Musical Theatre and on Dot and Tot of Merryland. The term "yama-yama" goes back at least to 1908.

Evidently it is "The Yama Man". "Yama-Yama" comes from the repetition of the word in the chorus:

From "Three Twins" (http://ibdb.com/production.php?id=6560), based on the farce "Incog." by Mary Pacheco (http://firstladies.library.ca.gov/11-Pacheco.html)


An early recording of selections from the show: http://cylinders.library.ucsb.edu/search.php?queryType=@attr%201=1016&query=yama&num=1&start=3&sortBy=&sortOrder=ia

An early (damaged) recording of the song: http://cylinders.library.ucsb.edu/search.php?queryType=@attr%201=1016&query=yama&num=1&start=2&sortBy=&sortOrder=ia

Another, by Ida Jones: http://www.archive.org/details/AdaJonesVictorLightOperaCompany-TheYamaYamaMan1909

On the back page of the sheet music is an ad for a book spawned by the popularity of the song:

To those thousands upon thousands who have witnessed a performance of "The Three Twins," which has played more than 600 consecutive times in the city of New York alone, the basic idea of "Yama Yama Land" as an extraordinary children's story will be perfectly plain.

The universal interest aroused by the acting-song feature entitled "Yama Yama Man," most ably done by Bessie McCoy and her troupe of triangular Yama Yamas, easily gave it the prestige of being the hit of two theatrical seasons--something entirely out of the ordinary in such a vast field of novelty as the theatrical world. In the song hung the legend of this wonderful man--the Yama Yama Man--unseen, unknown, but known to be here, there, anywhere, everywhere--all pervading.

From the mere whisper of so strange a character, Grace Duffie Boylan has traced him to his queer home and his equally queer people. In doing this the author has given adventures of the rarest quality fo a fair-haired little Sylvia whose escapades will open wide the eyes and imaginations of children of the fairy age.

In aid of the text Keller's pictures are full of humor and are reproduced in many colors. As a complete book "Yama Yama Land" has all of the qualities making for beige success. Large octavo. Bound in fine clothe with a striking colored picture inset. Pictoral jacket in colors."

Photos of the original production