Little saw his first circus at the age of seven, which instilled a life-long love of the circus in him. His nickname "Frosty" was given to him as a boy by his grandfather, who compared him to Jack Frost due to his love of playing in the snow. It is more than a stage name; he even signs his checks "Frosty Little".
Little served in the US Navy during World War II, and was wounded. He learned juggling from a fellow patient while convalescing, a skill that would later help him land his first clowning jobs.
In 1950, he married his wife, Patricia, who is a photographer and former schoolteacher, with whom he has two daughters.
Early career
Prior to joining the Ringling Bros. and Barnum & Bailey Circus, Little worked as a postal employee and land surveyor in Colorado. From 1954 to 1956, he performed as a clown at a local amusement park on weekends, wearing a rented costume. In 1956, he went into clowning full-time after he was hired by the Joe King Circus, with which he toured the Rocky Mountain States for half of the year. The rest of the year, he freelanced as a clown at birthday parties and special events. He continued working for the Joe King circus for seven years until its closure in 1962.
With The Greatest Show on Earth


Little also worked for other small outfits like the Tom Mix Show and Sells Floto Circus, but he had long had his eye on "The Greatest Show on Earth" – Ringling Bros. and Barnum & Bailey. In 1968, he finally got his chance when Ringling created the Ringling Bros. and Barnum & Bailey Clown College; Little was in its first graduating class, and at the age of 44, he landed a job with Ringling's newly split-off second touring unit.
In 1970 Little was promoted to "Boss Clown" of his unit, and from 1980 until his retirement in 1991, he was the circus' "Executive Clown Director", overseeing clowns in both units, and writing new gags for the clowns to perform. In his lifetime, he has written over 300 gag routines. In his later career, Little also served as an advance man for the circus.
Little also taught at his alma mater, the Ringling Bros. and Barnum & Bailey Clown College. In 1988, Little also helped establish the Ringling circus' first overseas touring unit (based in Japan), choreographing gags and training members of their Clown Alley.
Among the dignitaries he entertained were US Supreme Court Justice Sandra Day O'Connor and US President Richard Nixon. He also appeared on 12 Ringling Bros. TV specials.
Little sustained several injuries over the course of his career, including seven broken ribs, ruined knees, and numerous other injuries that left him with "crooked fingers". After one accident, he was rushed to the hospital (after completing his performance) still wearing his clown suit.
Honors
In 1983, Little was named "Master Clown" by the Ringling organization, only the fourth clown ever to be so named (after Otto Griebling, Bobby Kaye, and Lou Jacobs – Little's mentor). Little remains the last person ever to have been awarded the title.
Little was inducted into the International Clown Hall of Fame in 1991.


Little retired to Burley, Idaho, where he ran his own circus museum. In 1996, Little wrote a book on his experiences as a clown, entitled Circus Stories: Boss Clown on the Ringling Brothers and Barnum & Bailey Circus for More than 20 Years.
In 1977 Little was asked by the Sarasota Herald-Tribune what he would do after he retired from the circus. Little replied, "Leave here? Are you out of your mind? I'm never going to leave here. I'll always be a clown." 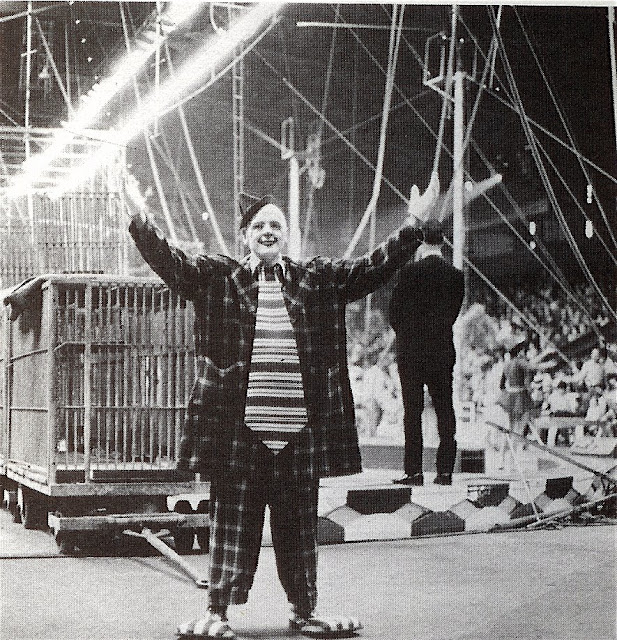 Mentor Gone but not forgotten...Honored to be trained and inspired by Frosty. "Hotarini" will forever the word that describes my friend. Rest in Peace.

What can one say? Frosty surely was the anchor that kept the alley in focus for so many years. He will be missed by a great many. HGope he's cutting jackpots on the "big lot."

May he rest in peace! Thank you for paving the way for all of us Frosty!

Just to clarify...Pat was Frosty's second wife, I believe he married her around 1970-71. He had no children with her, but did have two daughters from his first marrige.

Frosty and Pay celebrated their 41st anniversary on October 12th.

I am saddened to learn of Frostys passing this week.
Frosty adopted me into the family in 1991 as friend and father type.
I miss him so~
I never lost contact with Frosty and Pat thru the years.

I am and was years ago starting a klown museum and that is more a reality than a dream for me now:)

you were and always will be to me the Master Glen Frosty Little...., my mentor , friend and father figure.

always the best in prayers in thoughts for all,

I was saddened to hear of Frosty's passing. He was a good man, and a good clown. I forgot to tell him I'm a Grimaldi descendant. Perhaps they're jackpotting now. Thanks for blogging this announcement.