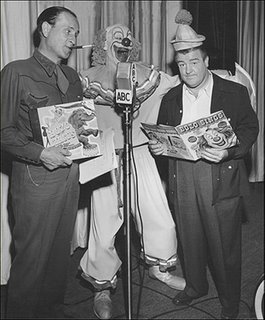 I got to spend some time with Dean "Elmo Gibb" Chambers after the Cole Bros. show yesterday and he told me (among a lot of other very interesting things) about being taught the art of being a good verbal Advance Clown from someone who had learned it from Pinto Colvig.
Posted by Pat Cashin at 8/21/2006 06:40:00 AM

Abbott & Costello are so famous for their, "Who's on First", I think two of their other great gas get lost. One is "Two Tens For a Five", and the other is "The Room Rent".

I liked their version of " The Susquehanna Hat Company" as well.

I worked with Vance Colvig (the son) on an episode of Love American Style. What a nice man and what a great 'rubber face.' Vance was my local Bozo in La when I was growing up.

I've heard a LOT of stories about Vance and I'm sorry that I'll never get the chance to meet him.

I've seen the pictures and he was a GREAT Bozo!

Tim Burton has had a lifelong fear/interest/fascination with clowns because he was absolutely terrified/obsessively fascinated with Vance's Bozo as small child growing up in Burbank.

I wish I could have spoken with Pinto. What a REALLY interesting life to have lead.

And Abbott & Costello ARE just flat out KILLER at the "Susquehanna Hat", "The Crazy House", "The Lemon Bit" and hundreds of other vaudeville and burlesque scenes.

We are EXTREMELY fortunate that SO MANY classic scenes and blackouts survive thanks to the films and television appearances of A&C.

My son saw A&C meet Frankenstein the other night, his introduction to A&C as well as the classic Universal monsters.

You should hear his impression of Lou Costello's frightened, asthmatic wheeze! It makes a dad feel...well, like he's doing something right when his three year old can do both Lou Costello and Curly Howard.