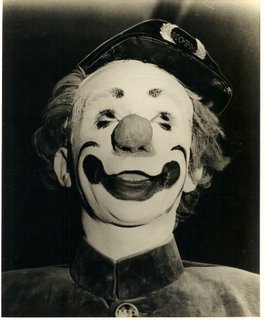 "He was the man behind every great gag. A sweetheart. He could make anybody's problems seem very light. The only thing he took seriously was his work, which got him laughs."

I'm very tempted to start blogging the files that I have on Jung's murder. There isn't much information on it available on the web. The man responsible was paroled a few years back and it would be my very sincere wish that he stumble across it and learn just how much the world lost when he needlessly killed Paul Jung.

The murder must have had a chilling effect on the Alley, which was reported in the press as being comprised of 32 that year (1965) . We all know that the Alley numbered just 14 when Irving, Israel and Judge Roy bought the show in 1968. Albert White, who had been with Ringling for years and was supposed to have dinner with Jung the night of the murder, was with Beatty-Cole the following season. I don't know that Jung's death is the exact reason that "Flo" left but I would imagine that's got to haunt a person.

Pat, I never knew about his murder. I guess Ballentine left that out in CC.

Is there more info about it that I can find online?

Pat just a note as to why "Flo" left RBBB. That was my first year in the CBCB alley and Albert and I were good friends before that and I boldly asked him why he left The Big One. It was due according to him over a financial dispute with the office. That is as much as I could get out of him. The mystery goes on....Bernie

I recently stumbled across a scrap poster form the mid-century, slightly water stained and wrinkled, yet cheaply framed under glass, obviously quite old, it was apparently torn from a poster and glued to a 9x14 cardboard, On the back someone had penciled "Paul Jung murdered in New York" Thus beginning my search for information on one of the world's greatest clowns. To some it is only trash night, but to the experienced collector, it is an endless treasure hunt. What I am wondering is "Who killed Paul Jung?" although,,,this is proof that Great clowns do live forever.