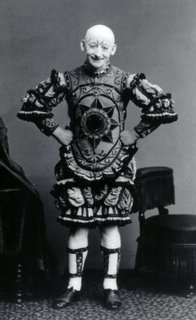 George Layfette Fox
America's First Great Whiteface Clown
Known as the "American Grimaldi", Fox introduced Joseph Grimaldi's violent slapstick and topical satire to the American stage. He transformed it into a distinctly American style of humor reflecting the events of his day and, though never a circus performer himself (he did perform at Barnum's American Museum), influenced circus clowns well into the 20th century.

In 1867, he created his masterpiece, Humpty Dumpty, giving over 1,000 performances on Broadway. His character in this production was a distinctive American anti-hero and helped Humpty Dumpty become the most popular pantomime production of the time.

The slapstick form known as pantomime had been a Broadway staple since before the Civil War, but it reached a peak of popularity during the 1860's and 70's. These shows placed figures from Mother Goose stories in wildly varied settings, always finding an excuse to transform them into the clown characters of traditional Commedia Dell Arte. Popular songs were loosely inserted whenever the audience needed a breather. Lavish sets and athletic clowning were expected, along with elaborate ballets. By far the most popular of these pantomimes was Fox's Humpty Dumpty.

The plot had young Humpty and his playmates turn into harlequinade characters and romp through a candy store, an enchanted garden and Manhattan's costly new City Hall. Fox's mute passivity set him apart from the raucous clamor surrounding him, and audiences took the little man to their hearts. Humpty Dumpty was revived several times. Fox eventually gave 1,128 performances in the title role, becoming the most highly paid actor of his time. He initiated the tradition of Wednesday matinee's to take advantage of the show's appeal to children.

Considered by many to be the funniest man of his time, his whiteface character became an important part of popular American imagery, being used in advertisements and children's books long after his death. He is considered a major influence on late 19th/early 20th century circus clowning and his unique style continued to be influential throughout early American cinema.

Sadly, he needed to be removed from the stage during his final performance due to his erratic behavior and was taken to an insane asylum where he died three years later possibly as a result of poisoning from his lead based white make up.

I am currently reading David Carlyon's book "Dan Rice, The most famous man you never heard of." It is a fascinating look at clowning in the middle to late 1800's. I keep marvelling over how different, and at the same time, how similar clowning was to when I was on the road.

Is there a decent book on Fox?

"Sadly, he needed to be removed from the stage during his final performance due to his erratic behavior..."