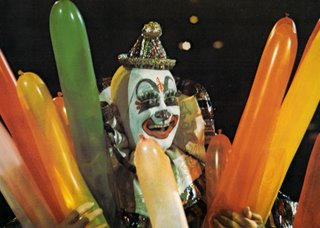 Ernie "Blinko" Burch in his classic whiteface, developed throughout the late 40s and into the 50s on the Ringling show. He's seen here performing his balloon "Come-In" gag (similar to the one performed by Dime and Connie Wilson during the same era) on Paul Kaye's Circus America at the Capital Centre in Washington D.C. in 1974.

A longtime star at Shrine circuses, he and his wife Maran became fixtures at the Circus Circus casino in Las Vegas.

From the program, Circus America looks like the single greatest show in the history of the entire American circus industry and I'm not just saying that because I'd like to get booked for Evansville this year!

Circus America was a blast! We (RBB&B Red Unit) were in the DC Armory when Circus America 'day and dated' us. It was like a circus family reunion...

It was a great show. I remember seeing a carpet clown take out a tissue and show both sides as if he were starting a magic trick. He then held it tight against his mouth and stuck his tongue threw the tissue. I don't think I have ever laughed so hard in my life. Was it simple... yes, was it stupid... yes, but it was so unexpected that I 'busted a gut.' I wish I knew who did that gag.

Was Charlie Noc on that bill? I vaguely remember jack-potting with him there. Charlie told us something that I found incredible. He used to walk a wire with no feeling in one of his legs. He broke his back on a sway-pole at the Ohio state Fair. Dust from the horse racing settled on his pole and he couldn't stop his inverted finale slide. Nice guy.

I'll dub off a copy for you of the Circus America show...it really was a pretty incredible show.

clown ron,
Yes Charlie Nock was there, Charlie & his family were great friends, and spent a lot of there off time at our,Circus Farms. My biggest pain on Circus America was anything pertaining to the Swaypole display, if I talked to Charlie first Joe Bauer would be mad, if I talked to Joe first Charlie would be mad. I finally solved it by getting them all together and then telling them what ever.