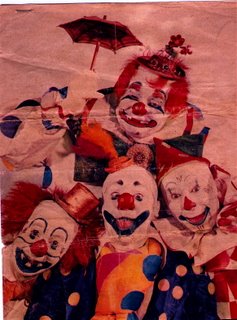 A photo that I would guess (from Felix Adler's makeup) to be taken in the 1950s.

On top, Felix Adler, the longtime "King of Clowns" on the Ringling-Barnum Circus.

On the bottom, Paul Jung, ace Producing Clown and in addition to creating scores of classic walkarounds, track gags and ring gags also created gags and props for clowns on other circuses, stage shows and ice shows.

On the left, Paul Jerome in whiteface. Jerome had a memorable tramp character as well.

A few weeks back I promised a picture of Felix Adler and Paul Jerome's similar whitefaces, side-by-side, for comparison and by golly that's exactly what I delivered : )
Posted by Pat Cashin at 10/11/2006 09:24:00 AM