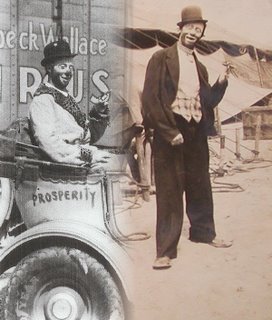 If this photo was tken at the dawn of the New Deal then why wasn't Paul Jerome working in his whiteface on the Ringling show as the 1930's era programs would have us believe? How much time did he spend on Ringling during those years?

Just when DID Jerome start using a tramp character?

Did he use his whiteface strictly for Ringling program pictures and his tramp for his work on Hagenbeck-Wallace?


Bill Strong sent along a side by side comparison of his "mystery tramp" photo that we had previously decided couldn't be Paul Jerome, but the makeup on the right is identical to to the makeup of the tramp on the left who couldn't be anyone BUT Paul Jerome.