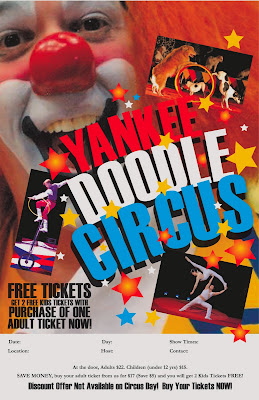 WOW. You had a great Orthodontist

Pat Cashin has the best teeth in show business.

hey pat can I have a autographed one of you ?thanks Rob...

Did Kenny pay for those choppers?

I paid for them.


More accurately, comedy paid for them.


When I decided to quit doing stand up comedy and finish college there were some loose ends that I decided to tie up.

I got myself braces.

I got myself a new car

I got myself a day job with tuition reimbursement.

And thanks for all the compliments on my teeth ; )

Kenny--
My dentist and oral surgeon TOGETHER don't have teeth as good as Pat Cashin's.
Next time I have a dental appt I am bringing this poster and showing the doc want I want.

This is Mike Naughton's circus right? I'm glad to see clowns running the show, as it should be.
I'm convinced that the future of the circus is in smaller regional shows produced by people who care about the circus as an artform. Keep doing what you're doing.

Clowns, real clowns, have that wonderful quality of thinking in the abstract, where everything is possible.

Besides "corporate and social" circus themed-events, our "Road Clowns" have included;

Remember, we are clowns and EVERYTHING is possible.

If any of the REAL CLOWNS WHO FOLLOW THIS BLOG would like one of these posters, send your request-
MikeNaughtonCircus@verizon.net
-
To keep me occupied while bedridden with a slipped disc, I have posted a few photos.

Heartfelt THANKS to Prof. Pepsodent!

Mike
How can we get your route ? I know you have played various spots on Long Island where I live and I always seem to miss you.
Would love to come out and support your show.
Thank you

Mike, I am sure your definition of a REAL CLOWN is a RB3CC graduate.......correct?

your friend the Yama

Please include on the Road Clown inventory of hilarity-

My point was this: do NOT let any producer tell you that there are "just no clowns left anymore". Translated, they are saying, "Nobody wants to work for the lousy pay I am offering."

Clowns and musicians are able to take their unique talent to high paying jobs outside the circus, and they do.

YAMA -- don't be to certain of your friendship with me, I don't believe we have met.
1. Real Clowns know who they are.
2. Many of the clown FEATURED on my circus NEVER went to Clown College or had anything to do with Ringling. I hire FUNNY.

Need help with that zipper in the back of your costume?


Speaking of real clowns ---
Two people who did tours with Yankee Doodle, not clowning, but in "tech" dept are Kevin Brown and Dan McCallum -- we speak of those guys very often and with great memories of wonderful tours.

I lost two teeth from comedy; well that and a class ring. Sometimes you learn the hard way when not to use a one liner. Now those two teeth are like stars, they come out at night.

Hey Pat, got any before shots? Could you eat corn through a chain link fence? Do you still ware your class ring?

Real Clowns: Once upon a time at CW – each year we’d get the new batch of RBBB CC Grads., they all were very good looking clowns, (I’m still married to one.) They were all very confident, but the real clowns soon realized that they were here to find the funny clown in them, and most all of them did just that. Some were only here waiting for someone from the Red or Blue show to break a leg, 25 years latter I’ll bet some are still waiting. I know that I am constantly wondering what it would have been like to follow my destiny that year that I had my first child, bought my first house, lost my first job, and was forced to suck up my pride and go work for Disney World in fur. I wonder but I have no regrets.

The interesting thing about seeing the parade of “First of Mays” from CC come into our alley was that each year that brought with them new techniques. One year they all came with this surgical glue to replace the spirit gum, (I didn’t like that one), each year you could notice that the lines got bolder and the clown white got smaller, but the best improvement was the year they all were taking their makeup off with Baby Magic Baby Bath instead of baby oil.

I learned A LOT from some very funny folks at Circus World '84-'85 and Little John was one of them.