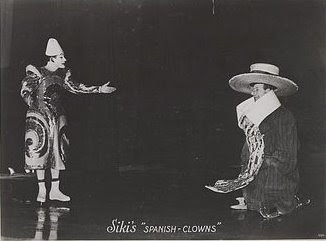 Now, I've never heard of them.
I'll do some research.
Where did you've found the pic?...
Anyway, many european entrées used to do ice shows in the 60s and 70s.

Mike, Raffaele, Pat,
This might be a tad off-topic here, but I've been searching for videos or pics documenting some of the circus acts and relevant comedy acts as appeared on the Ed Sullivan Show. At the moment, I'm thinking specifically about the Thedy's with a music entree (I believe)and Spike Jones' stage act (again, I believe) performing a wild version of "Waiting On The Robert E. Lee". I remember, in bits and piece, so many wonderful circus and fun musical acts from watching "The Shew". T'would be great to see them again and anew.
If you guys have some solid info or leads on where I might find a collection of these video confections, please let me know.
So far, my web search hasn't born much fruit beyond pop music acts. Thanks.

The Paley Center in NYC and LA (formally the Museum of Television & Radio)have a fairly extensive collection of Sullivan shows. You can watch them in their facility. There are some commercially released DVD's of Sullivan material, including one callled Ed's Most Ourageous Moments, that features some novelty and variety acts. Pat and I get most of our video, DVD and films from private collectors, and that is the hunt. Trde magaizes like Big Reel offer "collector to collector" type dealers of video/dvd. The internet has e-bay, their are private dealers like Bobby Hakes Circus Video's that offer material and Pat himself sells select Clownalley.net complilations of some great video.

There are talks beginning where we might host a "Clown Acts and Variety Performers" seminar-type weekend, where we schedule a two day presentation of just that....hours of rarely seen clown acts, gags, entrees, variety performers, burlesque scenes, vaudeville acts, ice show comedy, classic film & TV comics. We are trying to figure out if there is a real desire for people to come to an event like this and where to hold it. Any thoughts or suggestions?

Greg,
thanks for the good leads.