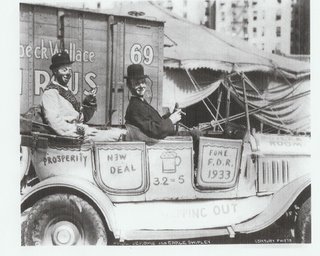 Paul Jerome and Earl Shipley on the Hagenbeck-Wallace Circus in a photo that looks like it may have been taken by Edward Kelty back in the 30s.

If you look closely you'll see that both are wearing Bobby Clark-style painted on glasses.

Bobby Clark and his comedy partner Paul McCullough started out as circus clowns before moving on to vaudeville, Broadway and movies. Clark developed his painted-on glasses while circus clowning and kept them throughout his career.

Earl Shipley was my Great Uncle and brother of my Grandmother Myrtle Shipley/Ward. Billy Ward was the twin of my Mother Louise Ward/Barker. Billy Ward started out as a Trapeze Flyer catcher and did not become a clown until age set in and he could no longer fly. Both spent a life time with the Circus. Both are buried in Sarasota Fl. Neither had any children. I am their closest living male relative today. Bill Barker mvbillyb@cox.net