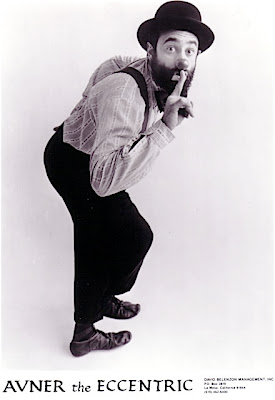 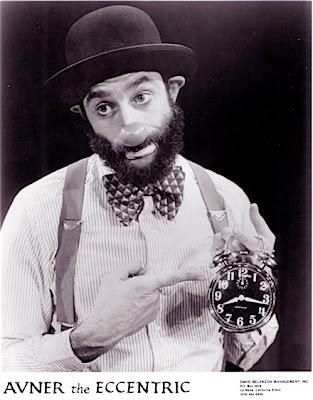 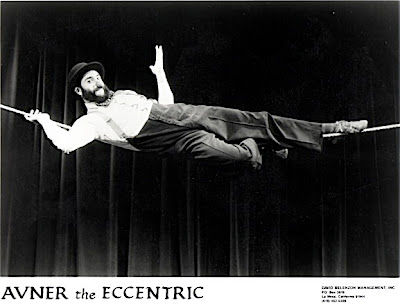 Avner's show the other night with Mark Jaster seems to have put everyone in an Avner frame of mind and "Avner-mania" is running rampant across the country.

But why talk about him here? This is a forum for circus clowns, not "New Vaudevillians".

There is a lot more circus-style clowning to Avner than one would expect. While he may not wear the wig, big shoes or emerge from a tiny car that audience still associate with circus clowning in America, I don't think he'd be at all out of place on a show like Circus Flora or Big Apple. It's actually suprising to me that he HASN'T toured as the "featured clown" with a one-ring "New American Circus". He's mastered virtually all of the manditory "New Circus" skills in Hovey Burgesses' CIRCUS TECHNIQUES and I think that his unique character would really flourish outside the strict confines of the procenium stage.

Bill Strong sent along these pictures from a time long ago and far away when Avner still linked to circus clown tradition via that smallest of masks, the red nose. He has since dropped it, and I think it's for the better. His face is more than expressive enough to convey the idea of "clown" without any help from makeup or noses.

youre absolutely right:
he could fit in in circus perfectly!!

not in a glamourous show like rbbb
but in a one ring circus.

And he would be perfect for european circuses.

I think he would be great at roncalli. specially in the early days of rancalli he would fit perfectly in he concept.

the act of pic with his big soapbubbles and avner.

with the band doing the jewish music: would be perfect!!

He did do the Monte Carlo festival