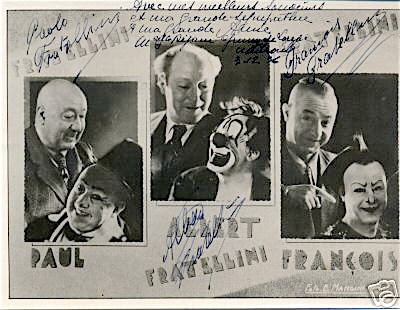 An autographed photo of The Fratellini Trio, (from left) Paul, Albert and Francois.

I wonder why they changed Paulo to "Paul", Alberto to "Albert" but Francois never became "Frank"?

Do you think it's a "whiteface" thing?

"Frank Fratellini" doesn't have the same ring anyway. Sounds like a very blunt plate of pasta.

"Frankie Fratellini" is even worse.

It's probably better just he way it is.

well it's very simple to explain.

you make the names sound englisch paul and albert.

but thats wrong. actually all the tree names are french. because they worked mainly in france for medrano.

so you pronounce the names the french way:

en francois as franswa whit a short a

it is as simple as that: the three names are the french versions of there italian names.

thats why he isnt called frank: it isnt because he's a white face ( yes for a white francois sounds more ellegant thats true)

they worked in france: so they use french names. it is quiet clear why they don't use english sounding names huh??

so now you know: francois is french and so is paul and albert ( these are french names from origin, in english language the pronounciation changes)