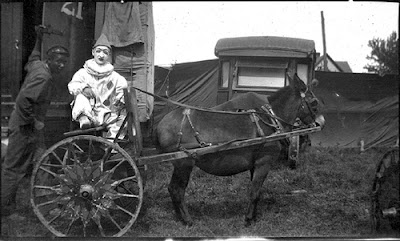 Pat: You may have received responses by now about Shorty Hinkle, but assuming that it's the same Hinkle, I believe he's buried in a cemetery at Willard, Missouri, near George Carden's quarters. He died in the early 2000s. I believe I saved the story from the Associated Press and/or Springfield, MO, newspaper, and I will look for it in my boxes of clips. In the meantime, as I recall, Shorty had been working for Carden for many years, and in his waning years, Carden was taking very good care of him. (Carden himself was adopted by Larry Carden, co-owner of Carden-Johnson Circus when Larry married George's mom when George was about 8 or 10 years old--I just found this out last year). I hope this helps in your quest for information.

>Hi:
>
>Thanks but that isn't Shorty Hinkle. He died Feb. 27, 1977. Was cremated in Florida. Ashes?
>
>Appreciate you sending me any information. Does anyone know who the gals were with him in front of the side show?
>
>Twilia