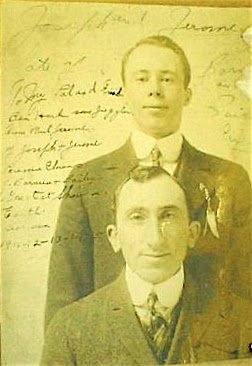 An extremely rare photo Herman Joseph and Paul Jerome out of makeup in 1915, signed by Paul Jerome.

Can we guess from this that Herman Joseph and Paul Jerome tried their luck and left the circus for vaudeville in 1915, only to return to circus clowning shortly thereafter?

If nothing else this photo tells us that Paul Jerome (and possibly Herman Joseph as well) began his circus career in 1911.

Hello Mr. Cashin: Having never looked closely at your site, I was surprised to see this photo! I assume that you took this photo off of the eBay website. I purchased the photo from eBay for $24.99 plus shipping, which I thought was a steal! I'm surprised that you nor anyone else for that matter did not bid on it. It was up for a week and no one bid and when it was relisted I put in a single bid and was amazed to get it for the opening bid price. At any rate, I would be happy to make a copy of it and send it to you for your records if you would like. Just let me know!
Sincerly,
Neil Cockerline
Minneapolis, MN

Congratulations on winning a great photo!

I was in China while this auction was going on and I didn't have a whole lot of internet time. I'd love to get a copy!

Please send me an email at cashincomedy@yahoo.com.