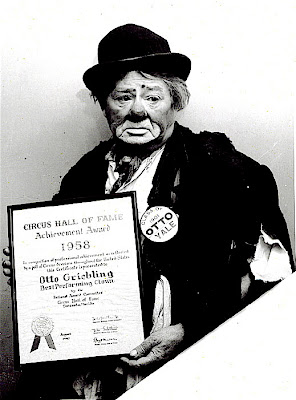 Robin Estes sent this message in response to yesterday's photo of Otto on the Ringling '63/'64 European tour...


As to your questions about Otto seeing any of the European clowns on their tour of Europe, Jackie LeClaire could probably answer that question. He was on that tour with Otto. On the old History e-group he wrote the following:


(Jackie LeClaire speaking about a photo of Otto.)

The photo of Otto is heart rendering. It is painful yet a joy to look at. He shall always remain a great influence, not only in clowning, but in my life. I am so blessed at having been so close to him and having him share some of his life with me. We had such a small clown alley on the European tour that held us all close together. I will never forget how entertaining he made the ship trip back from Rotterdam to New York. It was a passenger freighter with just 85 on board and the eight days would have been like months in the cold spring, but Otto saw that we all enjoyed every day with his antics. He truly clowned from the heart and his warmth is still present in so much of clowning today. There is no question in anyone's mind who ever knew him and saw him clown, what status he should have in the circus clown world. No one has ever even come close. And this was all before they even knew the word "Master Clown". Here I am getting carried away again. Sorry,

More on the Russian Tour

Actually the circus in Russia was just titled, I think "CWA" on the marquee, which if I remember the correct letters and I can look them up, simply meant USA. We were all under contract with Holiday On Ice, owner Morris Chafflin. There was no press or mention to my knowledge of Ringling in Russia.

Briefly, while the ice show was in Paris, the Russians came to Chafflin and asked if he would relinquish the time he had booked the ice show into Paris so that the Russians could bring in a show there during that time slot. They wanted the building. I am not sure exactly what they wanted it for but it was very important for them to have it at that time.

Chafflin and that might be Shafflin with an S. was an Impresario. He brought his ice shows all over the world. He was also a smart businessman. He proposed to the Russians, that he would let them have the building in Paris if they would let him be the first American Impresario to bring the Russian Circus into the United States. They agreed, but according to the relations between Russian and the US, a Russian circus could not come into the US unless we sent one there. It had to be a cultural exchange. The rest is history. We opened in Moscow on July 4, l963 and the Russian circus later came for a US tour.

The European circus was under the Ringling name, so we actually changed employers when we went from Kiev Ukraine to Lille France.

John Ringling North would not pay anyone's fare back from Europe when the show closed in Stuttgart Germany. I went to the American Embassy about the fare deal and they said we could do nothing because we changed employers when we went to Europe. That North did not bring us to Europe.

In Russia we were paid 1/3 in Russian Rubles and the rest was deposited by Holiday On Ice to a bank in Minnesota. All our hotel and transportation was paid but not food. Unfortunately some of the bigger acts accumulated quite a bit of savings in Russian money but found out that although they could take it out of the country, as soon as they crossed the border, it was worthless. I actually saw one very conservative performer cry as he had been saving so frugally.

Enough on this subject. Here I go rattling on again. Love you all,

Pat,
I have been doing some research about Ringling's European tour in regards to the herd of elephants they bought from the Chipperfields. Do you know of any pictures of the tour or have an email for Mr. LeClaire so that I may contact him? I hope you can help!
Regards,
Ryan