THE DESANTOS: The Paul Jung Award


Photo taken, without any permission whatsoever, from the DeSanto Archives 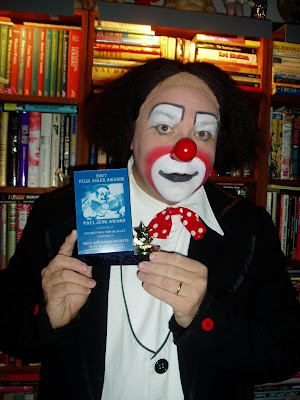 Greg DeSanto shows off his "Felix" (as Karen presumably holds the camera). The DeSantos won 2007 Paul Jung Award for best "Duo, Trio or Alley" Clowning here on CLOWNALLEY.NET and the statuette was presented at an extremely austere and solemn ceremony (where Jason T. Stewart won adoration and accolades for his stirring "Mandate From the People" speech) in Tiandu City, China.

Aren't there two more awards still waiting to be given out before the voting starts for 2008?

Now you've done it! Pilfering from the DeSanto archives. As Red Skelton said as everyone noticed him, "I'm almost sorry I posted it in the first place.

As always, thank you Pat for for award and organizing the grand roast/tribute in China. We are honored and grateful to be among so many talented clowns and performers.

The hell with youtube...wait till Pat & I get our Clown History Convention together and pull out all the video stops!

-Greg & Karen (my better half and camera holder)