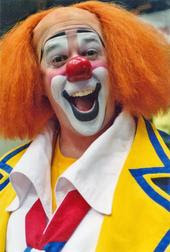 The Kelly-Miller Circus' 2008 season will begin on March 15th in Hugo, OK and the clown from opening day through April Fool's Day, April 1st will be... me!

Here's some scoop about the all-new 2008 edition of the show from David Hammarstrom's blog SHOWBIZDAVID...

A touch of Ringling magic has moved to a town called Hugo. Today, if lucky, you might spot John Ringling North II gearing up his staff for the second Kelly-Miller season operated by a real Ringling ... And from an anonymous source comes a prediction that what’s about to depart Hugo would delight the late Cliff Vargas: “All the pieces are there” is a promise that makes me wish I owned my own private jet, so I could swoop down and take in the grand opening on March 15 ... Jim Royal, by the way, who does the Concello thing for North II, before that served a number of seasons as production unit manager for Big Apple. Among the editions he supervised was Picturesque, a show I found quite wonderful (at least 3-1/2 stars wonderful). Jim reflects on the modern era: “It always seemed to me that the themes of the show never overwhelmed the performance. BAC never got too ‘high brow.’ Picturesque had many artistic references that some of our audience members appreciated. For those who didn’t catch them, that didn’t intrude on their enjoyment of the show.” Royal gave the climactic teeterboard Kovgars, who flew fast and last on the bill, the Royal attention they well deserved, heading for the main tent “damn near every show just to catch their act.” Great taste, Jim ...

The show, being owned by John Ringling North II, makes me the first American circus clown to work for an actual member of the Ringling family in 40 years!

There have also been discussion of me joining the show for some East Coast dates and doing some advance this summer but those are still in the works. So if you are in the Hugo, OK or Dallas/Forth Worth area be sure to come on out and say "hi" and, if you lower your expectations, you might just enjoy some of the classic-style hokey corn that I'll be selling.

Well done, Pat. I wish you a safe and enjoyable tour and know you'll represent 'us' with your classic clowning.

Congratulations, Pat! If anyone deserves to carry on the real Ringling tradition, it is you!

Damn! Hugo, OK!!! You can't get any closer to "trouping" than that!

Congratulations, and all the best!

I look forward to seeing your take on Shiner's movie gag.

Way to go, Daddy-O!
I'm hoping to see you in DFW. Tell 'em to add a date near Austin!

Enjoy - and try to book a gig nearer to England some time!