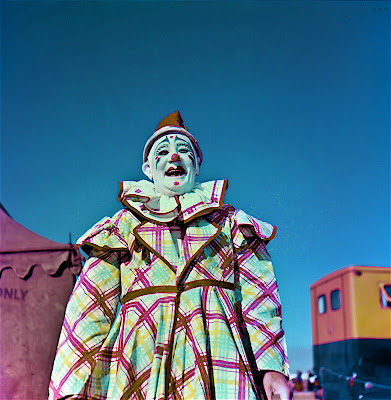 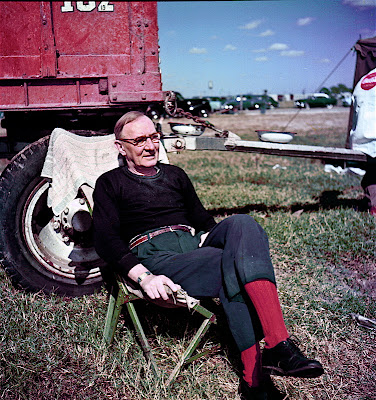 More of Janette Rainwater's portraits of the 1954 Ringling Alley, these of William "Bill" Hanlon.

Bill, and his brother Fred Hanlon were descended from the famous Hanlon-Lee family of comedy acrobats.

A group of pre-Vaudevillian acrobats founded in the early 1840s, the Hanlon-Lees were world-renowned practitioners of "entortillation" (an invented word based upon the French term entortillage, which translates to "twisting" or "coiling") – that is, tumbling, juggling, and an early form of "knockabout" comedy (later popularized by such groups as the Marx Brothers and the Three Stooges). The troupe consisted of the six Hanlon brothers and their mentor, established acrobat Professor John Lees.

Originally billed as "The Hanlons," the group debuted in 1846 at London's Theatre Royal Adelphi. At this time, the company consisted of George, William, and Alfred Hanlon, who were essentially wards of John Lees until his death in 1855. After his demise, the Hanlons returned to England and enlisted their younger brothers – Thomas, Edward, and Frederick – and rechristened themselves "The Hanlon-Lees" in honor of their fallen friend and instructor.

The newly expanded troupe made its American debut in 1858 at Niblo's Garden in New York City, and spent the next four decades touring the United States and Europe. As their skills improved, their performances became more elaborate. When Jules Léotard introduced the trapeze in 1859, for instance, the Hanlon-Lees quickly adapted to the new device; their next production, Le Voyage en Suisse (A Trip to Switzerland) contained an aerial juggling sequence that stunned Emile Zola, who expressed utter astonishment at the vast number of airborne objects.

The Hanlon-Lees also patented several inventions, including the aerial safety net and a wooden brace used in the construction of scenery (which is to this day referred to as a "hanlon").

Despite the death of Thomas in 1868, the group continued to perform regularly until the early 1900s, at which point George Hanlon's sons Will and Fred assumed control of the company's repertoire. They would carry the company successfully into the 20th Century, going so far as to appear on film for Thomas Edison in a production entitled Fantasma. The Hanlons would endure for another four decades, adapting their acts for vaudeville and finally appearing in the Clown Alley of the Ringling Bros. and Barnum & Bailey Circus.

In 1979, six American performers sought out the final living descendant of the original Hanlon brothers and asked for her blessing upon their new company, dubbed the Hanlon-Lees Action Theater. This modern incarnation of the original troupe is best known for pioneering and refining a theatrical form of medieval jousting, an event which the company continues to perform at Renaissance festivals in the United States. The modern Hanlon-Lees also performs Western-themed shows such as fantasy rodeos and cowboy exhibitions.

This is wonderful! Thank you.

I love the look of all these old films you are posting.

Can't get that from digital!