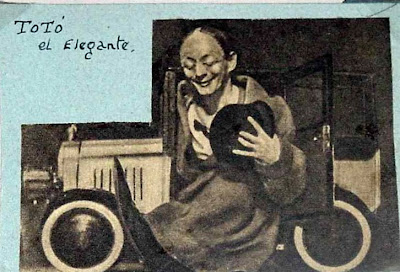 I was always under the impression that Armando "Toto" Novello was from Vienna, Austria but a New York Times obituary from December 16, 1938 that I recently found gives his country of origin as Switzerland.

He was born October 27, 1888 to George Novello, a circus horse trainer, and Amalie Shoenberg a lion tamer. He began performing early and was clowning in circuses by age 18.

He was seen by Charles Dillingham while in London in 1914 and brought to America to perform at the Hippodrome in New York. He had a successful career her in the States, performing on stage, in circus and briefly as the star of his own film series.

Unlike his Hippodrome clowning contemporaries Frank "Slivers" Oakley and Marceline Orbes, Toto seemed to have been financially secure and owned a spacious 10-room home in Larchmont, NY. Just like Slivers and Marceline he died much too soon.

He passed away at the age of 50 following surgery for an intestinal condition at Union Hill Hospital in the Bronx.

If you'd like to see old newsreel footage of Toto (and his midget car) performing at a January 1, 1930 benefit circus for German police officers and their families please click the title of this post.

Pat,
Isn't this the guy from the Lord of the Rings movies who ran around in the "Gandhi" skivvies?
Wade Burck

From what I've learned, this car was not motorized, it was brought onto the stage via a small rope, pulled from the opposite side, that was level with the stage to avoid detection.

Pat, when do we get to see the video highlights of JRNII's KMC?