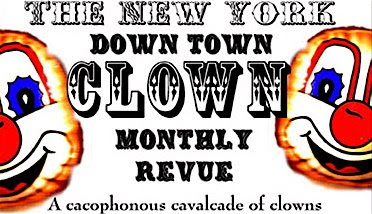 New York Downtown Clown would like to thank all the performers of our second year. Without each of their talents, innovations, and hard work, there would be no show on the third Monday of every month. The amazing clowns of New York City are brave, poetic, unique, and funny. New York Clowns are a strong community and the following Nominees represent some of the leaders of clown education, performance, and production from this past year.

AWARD CATAGORY EXPLANATIONS
The Audience Choice Awards go to the clown or clown group who received the most audience votes over the past year at The New York Downtown Clown Revue performances in a specific category. The four Nominees are the top four most voted for in each category. The clown or clown group with the most votes in a category is the winner of that category and will be announced at the Golden Nose Awards Ceremony on May 19th.

Audience Choice Best Clown Film:
Gravitational Fool, by Jeff Seal
Retard Midget Get Out of My Life, by Happy Hour

Audience Choice Best Clown Act:
A Clown Noir, by Butt Kapinski
At The Opera, by Those In The Nose
Coney Island Chris, by Chris Allison
Tea for One, by Nina Levine

Clown of The Year:
Moshe Cohen performed in the September Clown Revue and is nominated as 2008 Clown of The Year for his work as Mr. Yoowho, his teachings of Zen and Clown, and his involvement with Clowns Without Borders USA.

Mark Gindick, whose Happy Hour films were featured in the October Clown Revue is nominated for 2008 Clown of The Year for his work on Big Apple Circus where he shared the role of Grandma, his teaching work at SUNY Purchase, and his coaching with Assortment of Fools.

Jef Johnson performed in the August Clown Revue and is nominated for 2008 Clown of The Year for his work on the international touring production of Slava's Snowshow, and his development of clown and clown training through Jef Johnson's Clown Lab.

Keith Nelson performed in the February Clown Revue and is nominated for 2008 Clown of The Year for his work as Kinko the Clown, the performance initiatives he has co-created through his company Bindlestiff Family Circus, and his teaching work at New York Circus Arts Academy, Wagner College, and several youth programs.

Congratulations to all the nominees.
More information at www.newyorkdowntownclown.com/awards