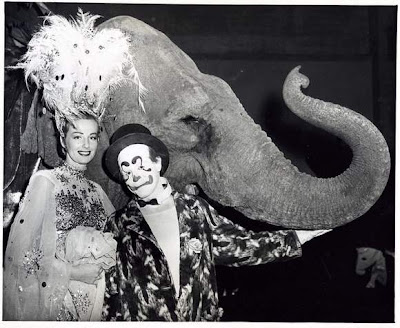 From the Sarasota Helarld Tribune


SARASOTA — Roberta "Berta" Ballantine was a showgirl in the Ringling Bros. and Barnum & Bailey Circus and her husband was one of the guiding forces of the circus's famed Clown College, but her greatest claim to fame may be a controversial book she completed shortly before her death questioning whether William Shakespeare wrote many of his most famous plays.

Ballantine, 85, who died April 17 from a ruptured blood vessel, spent 28 years researching and writing a book that suggests that most, if not all, of the works attributed to Shakespeare were written by fellow English playwright Christopher "Kit" Marlowe.

In "Marlowe Up Close: An Unconventional Biography with a Scrapbook of His Ciphers," she claimed Marlowe wrote the plays and sonnets while living under an assumed name in Italy long after his reported death in England in 1593 at age 29. She contended that many of the opening lines of Shakespearean plays are anagrams written by Marlowe revealing his authorship and his loyalty to Queen Elizabeth I, who kept his secret.

Anagrams, or rearranging the letters in words to form new words, were popular during Elizabethan times, Ballantine said. She also noted that Marlowe, a prolific writer and former spy for the monarchy, could not claim ownership of "Romeo and Juliet," "King Lear" and "Julius Caesar," among other works attributed to Shakespeare, because he faced persecution in England for his religious views if his whereabouts were known.

Ballantine was not the first to suggest that some of Shakespeare's works may have been ghost-written. Although scholars have traditionally debunked such claims, Ballantine hoped her extensive research would prod them to reconsider.

She also hope to stir discussion by seeing her 688-page book translated into a movie or television documentary.

Born May 31, 1922, in California, Roberta Light pursued acting after receiving an English literature degree with high honors from Pomona College in 1943. She enrolled in a drama school in New York City and was working as a showgirl in Billy Rose's Diamond Horseshoe nightclub when she was offered a job with the Ringling circus.

As the circus's "Snow Queen" in 1948, the statuesque, 6-foot-tall showgirl wore a silver sequinned outfit and white-plumed headdress and rode in circus arenas throughout the country on a gilded carriage pulled by six white horses, her family said.

That same year, she met her future husband, Bill Ballantine, a writer and illustrator who joined the circus a year earlier as a clown to write about his experiences. Bill Ballantine went on to become one of the deans of the circus' Clown College for several years in Venice.

The couple wed in 1948, and Roberta left the circus after a year to start a family.

Years later, her college interest in Elizabethan authors was rekindled by a book about Marlowe and her husband's hunch that an inscription on Shakespeare's tomb was an anagram. Bill Ballantine had been trained in codes while working for the Office of War Information during World War II.

That led Roberta Ballantine to set out to decipher the opening lines of the works attributed to Shakespeare while gathering information about Marlowe's life from numerous European sources.

She and her husband moved to Venice in the early 1970s, and later moved to Sarasota. Roberta Ballantine moved to Vermont last year to be closer to family following the death of her husband in 1999.

A charming lady and totally an original. Bill, of course, always called her "Miss Whiskers" (or maybe that was the nickname given her by John Murray Anderson who nicknamed everybody on the Ringling show.)

Roberta Ballentine wrote another book that became a happy memory for Nini (Hall) and me during our wedding reception.
My parents attended the graduation ceremonies for Clown College Class of 1975. My late dad was an avid promoter of health food, a trait he apparently shared with Mrs. Ballentine.
My mom had gone through dad's effects shortly before our wedding last April 28th, and found a copy of Roberta's book. "The Care And Feeding Of Clowns" and presented it to Nini right after the cutting of the wedding cake. I'd all but forgotten that book, and Nini who'd never seen it before, laughed loud and long along with all our guests, to my mock chagrin.
What a happy memory she brought to us that day.
I met Roberta Ballentine just once and briefly during clown college and remember her as a gracious, classy lady.
To all her family, Nini and I extend our sympathy and our thanks for her happy influence.

Pat,
She was indeed a fine lady. Some would suggest that she disrespected her roots, by questioning Shakespeare. I wouldn't, but some would.
Best wishes,
Wade Burck

Our world is less classy, intelligent and fun without this wonderful couple in it. And what a great photo, too!