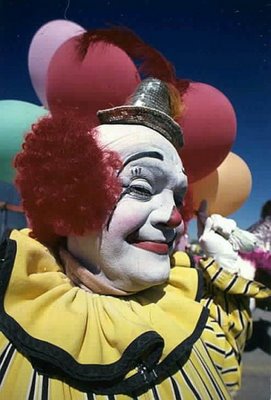 Billy McCabe on Circus Vargas in the 1980s. Billy was on the Vargas show when he recorded the video tape that is currently available from Bobby Hakes on eBay.

I don't know what it was originally intended for but it's a tape of Billy "holding court" in his trailer and pontificating on a series of subjects as he applies his makeup. It's a very interesting study of a man who clowned on various circuses for years and kept the traditions of the neat circus whiteface (as one would have seen from the late 40s through the 1950s) alive MUCH longer than one would have thought possible; truly the last of a dying breed.

The type of clown you just won't see anywhere on any show anymore.

Photo by Stuart Pearson from the Circus Fans Association of America website at: