I've had several people email me questions about the four Ringling "Master Clowns", how they were chosen, why others weren't and why there hasn't been any new Master Clowns since 1983?

I don't know. It seems like it's an idea that appealed to Irvin Feld exclusively and died with him.


Frosty Little's book CIRCUS STORIES states that in order to be considered for the title of Master Clown one must "have spent 15 years performing on the Ringling show, you have to have been a teacher at Clown College for a minimum of 10 years. You also have to have created 50 gags that were used in the show and you have to have been an advance clown, plus have a license in pyrotechnics and have worked as a Goodwill Ambassador for the show".

Under that criterea NONE of the four Ringling Master Clowns qualify!

Lou and Otto were the first two and while both had done advance work neither were "advance clowns", they had always been "show clowns". I doubt either had a pyro license but they might have. Both had worked on the show long enough but neither had taught at Clown College 10 years when they received the title, it hadn't been opened long enough. Both had written "50 gags", easily.

Bobby Kay had a long Ringling show career and extensive experience as a "Goodwill Ambassador" and advance clown. He taught at Clown College for many years but had not taught there for 10 years when he was honored with the title. I doubt he had a pyro license but again, he may have. Bobby probably had no trouble reaching the 50 gag mark either.

Frosty Little had the time served, the pyro license, the 50 gags and taught at Clown College for at least 10 years when the honor was bestowed upon him. But again, while Frosty had done advance work he had never worked exclusively as an "advance clown", he was always a "show clown", a "Boss Clown" in fact...the Boss Clown of BOTH units of the show!

Why weren't Mark Anthony, Coco Polikov, Danny Chapman, Prince Paul, Duane Thorpe, Steve Smith, Tom and Tammy Parish, Greg and Karen DeSanto or Huel Speight honored? They probably all qualify (or come as close as the chosen four do), but for whatever reason the program ended with these four very talented men and doesn't look to be revived anytime soon. 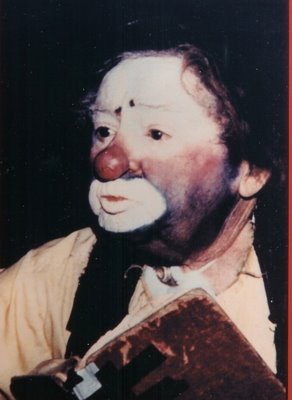