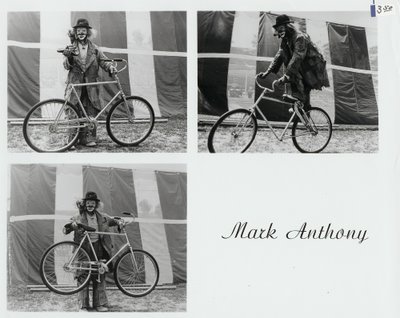 Mark Anthony's promo shots for his breakaway bicycle act. It was similar to Joe Jackson's (Sr. and Jr.'s) vaudeville act in concept but I've been told that Mark had a very different take on the act, the way that Lou Jacobs, Toto, Kinko Sunberry, Bobo Barnett, Hip Raymond and Billy Vaughn all used "midget cars" but each used them in a different way, with a different style and created very different acts.
Posted by Pat Cashin at 8/02/2006 09:43:00 AM

I've seen footage of Mark doing his bicycle act and it is much faster paced than Joe Jackson's version. Once you get passed the pedals, seat and handlebars falling off, it becomes a matter of character. Mark put his own personal comic spin on a standard act.
-Greg