Photo from George Bishop's book THE WORLD OF CLOWNS... 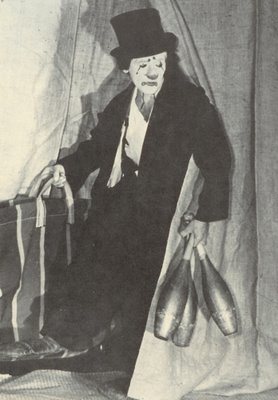 Although in early years he was seen as a whiteface, Mark Anthony spent the majority of his career as a truly unique and original tramp clown character.

"Mark Anthony was born Mark Galkowski in Norwich, Connecticut. During the depression, he joined the circus. Except for a stint in the Merchant Marines, he spent most of his life working with various large and small circuses: Sells-Floto, Harris Show, Dan Rice Circus, Clyde Beatty and Ringling Bros. and Barnum & Bailey."

Wow! Unlike Lou Jacobs, who shows a continuity between his whiteface and auguste looks, Mark Anthony's whiteface is a world apart from his tramp look. I'm glad he made the change!
Thanks for the posting. Now...do you have any video footage of Mark you can post???