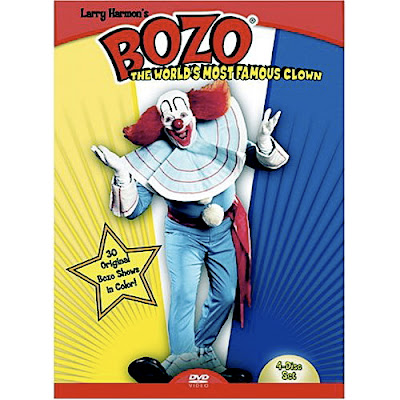 These are NOT the WGN Chicago Bozo show featuring Bob Bell (and later Joey D'Auria) as Bozo, these are the syndication episodes shot at WHDH in 1966 during the run of their Bozo show (1959-1970).

Interesting for several reasons, not the least of which is that they feature a young puppeteer named Carroll Spinney as several characters. Mr. Spinney would soon leave the WHDH Bozo Show for the Children's Television Workshop and create the characters Oscar the Grouch and Big Bird for Sesame Street, two characters he continues to play today almost 40 years later.

These WHDH Bozo shows were the ones that I watched as a very small child and was what sparked my interest in clowns and clowning. I still find them very interesting for how Mr. Avruch deals with the small children in his live studio audience. Like Buffalo Bob Smith on the Howdy Doody Show, he is an absolute master at talking to children while in the difficult position of being both friend/fantasy figure as well as parent/authority figure.

Please click the title of this post to be taken to the Amazon page for the boxed set.