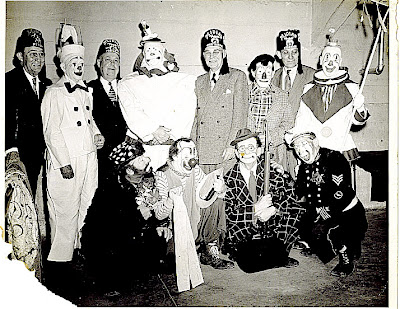 The Clown Alley of the 1951 Orin Davenport Shrine Circus in Detroit, MI.

Percy Rademacker: From Sheboygan, Wis. He was an outstanding auto thrill show clown doing tramp during the summer. I worked with him on the Aut Swenson show.

Jackie LeClaire: Notice over the years I kept making different types of clown costumes. Note the unusual collar on this one.

Dick Lewis: With white Fratellini-style make up. Longtime clown and veteran of many circuses. Lived in Baraboo, WI towards the end of his life and worked at the Circus World Museum. Died while doing his table rock act at a date in Texas. When he fell, he just missed the padding and hit the floor. He was a big circus fan.

Earl Shipley: He was always the Boss Clown as he was a Shiner and very close to Orin Davenport who produced the Detroit show. I bought his house trailer in l96l. He also recommened me to replace him as advance Ringling clown when he wanted to leave the road. Had been on a circus with my Father in 1913.

Joe Lewis: Married to Eva May who had been the first wife of Emmet Kelly. His photo was on a Ringling program cover back in the late 30's.

Thank you for your invaluable info Jackie!

As a young "1st of May", on the Davenport show, I listened in on a conversation between Percy Radimacher,& my boss Blondie La Blonde, that went something like this.
Blondie:"Percy, how are things in Sheboygen"?

Percy: "Not so good, we had a bad accident the other day when the Water Tank fell over & killed the Street Car Horse"

Blondie:"What are they going to do without the Street Car, can't they get another horse"?


Percy:"Well they borrowed the one from the Funeral Parlor but every time some one dies they have to take it for the funeral"

I think you get the idea, believe it or not, I swallowed the whole thing ,,,, after Percy left I said to Blondie,
"Boy that must really be a small town". I discovered later that this was Percy's thing ,,,, & everyone went along with it,
especially if he found some naive young sucker like me.