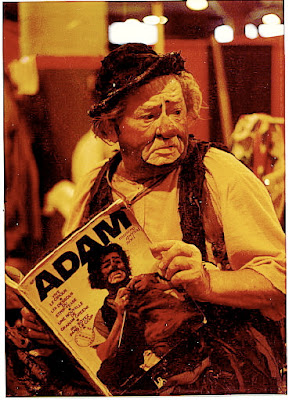 A photo of Otto Griebling sitting and reading a European magazine with his picture on the cover. This could possibly be one of the few pieces of physical evidence I've ever encountered that prove that Otto (and Freddie Freeman) were on the Ringling European Tour in '63/'64.

Dominique Jando told me that Otto was one of the few successes in a show that simply didn't click with European audiences and that there were posters with Otto's picture featured on them. I've never seen one anywhere, but then again I've never seen or heard anything about that magazine that he's holding either, so they may be out there.

Does anyone know if he met with any of the major European circus clowns during the tour? It would seem odd if he didn't go to see what the clowns were doing on more prestigeous European shows and that other clowns didn't come out to see him, one of the few American circus clowns with a reputation for brilliance.

Imagine if he'd found an audience, stayed in Europe and finally garnered the level circus stardom and critical acclaim that he'd deserved throughout his career?

A friend of mine was charged with handling the PR for the European tour - and feels he was let down badly by the Management. I'll try to remember to ask him if he knows anything about this.
From what I gather, Otto was gregarious, so would not have turned others away.

Alright Pat call me crazy But,

I have seen Pictures of Popov on Ringling.
But I have never heard about it anywhere, I have just seen the pictures.

If you are referring to Ringling in the States, you may be confusing Oleg Popov with Pio Nock?

Otto was on the European tour but never on the posters. They displayed instead Lou Jacobs on their publicity( I will try to find a scan one from my archives).
A wonderful detailed article about the history of RBBB European tour have been written last year by historian Don Stacey (that was a PR manager on the tour) for the British "King Pole" circus quarterly and I heard that is later published on Bandwagon.
About the Russian tour,t is true that the Ringling name was not used. As far I know, the program for Russia was completely different from the RBBB European program.
Popov never appeared on RBBB, but is possible that took some pictures on visit there.

I'm pretty sure Popov never appeared on Ringling, but I have seen photo's of him backstage at Ringling in the early 70's, taken by Bill Ballentine. He must have been touring with the Moscow circus in the US at the time. Of the 3 pictures I've seen, none show Popov with any Ringling clowns.