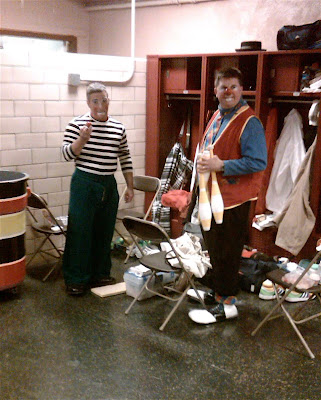 Thom & Todd, partners through seven years on Ringling and several years since at Sea World in Orlando, FL. Ringmaster Mike Naughton's camera caught them backstage at their Shrine Circus debut last weekend in Canton, OH where I've been told by several folks in attendance that they were a huge success.

Please note: I was the ONLY person in the show with A WHISTLE!
American Clowning is alive and well; congrats to the duo on their Shrine Date debut.

Laughs? Did you here that? It was laughs, I tell ya, laughs!