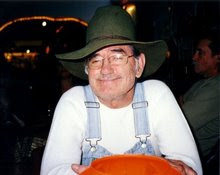 BILL STRONG
Springfield native Bill Strong performed a double-trapeze act with his wife, Trudy, for close to 20 years at just about every circus this side of Ringling Bros.
Bill Strong died last week at age 75.
By Andrew McGinn, Staff Writer 5:19 PM Thursday, October 29, 2009

For 1956, it was an awesome metaphor — the eagle clashing with the bear.

For what had to be the longest, scariest 15 minutes of anybody’s life, one lean, high-flying American met the aggressor bear head on to safeguard what we hold most dear in this land of the free.

Only when Bill Strong came soaring down out of the sky that day 53 years ago, his act of heroics was never to be recorded in the annals of any war, cold or hot.

Mainly because, sometimes, a bear is just a bear.

Strong, a Springfield native who died on Oct. 18 at age 75, was two years into his professional career as a circus aerialist when, performing at a fair in Cobleskill, N.Y., a 450-pound European bear busted loose on children’s day.

“The ex-footballer tackled the bear,” the paper reported, “and wrestled with the infuriated animal for about 15 minutes until the bear could be subdued by four men armed with clubs.”

Strong only needed 14 stitches in his head.

“I used to tell him I couldn’t help but be in the circus,” said his wife, Trudy Wilson Strong, whose parents and grandparents were circus performers. “You were the stupid one.”

Ironically, though, in a career spent dangling 45 feet in the air without a net, he really only got hurt that one day.

Strong’s recent passing means we’re that much closer to losing an entire era of American history for good — another showman gone off to perform three shows a day under that great big top in the sky.

“Even back then,” Trudy Strong explained, “we used to say circuses aren’t what they used to be.”

But, really, even the tail end of a golden age is still the golden age.

“Those were the good times,” Trudy confessed.

Married 50 years ago this past June after the 8 o’clock show of the Hamid-Morton Circus in Trenton, N.J. — “And we did three shows the next day” — Mr. and Mrs. Strong eventually partnered as The Pharoahs (sic), a double-trapeze act.

“Nowadays,” Mrs. Strong said, “we’d probably just use our regular name. At that time, we thought we needed a theme name.”

The theme was completed by a homemade replica of the Sphinx — “probably the size of a large dog,” Trudy Strong said — they’d stick in the ring as they performed.

“We were one of the better acts of the time, I must say,” she said.

They perfected their “cradle act” behind Bill’s parents’ house on Shaffer Street in the winter and spring of 1963. They were to debut that season with the Gil Gray Circus.

An April 1963 photo in the News showed Bill Strong, hanging upside-down, twirling a perfectly horizontal Trudy by a leather neck strap with one hand.

What the paper didn’t say was that Trudy had given birth to their first son just three months before.

“I was chubbier than I wanted to be,” she said.

It was a different era. Trudy Strong performed a trapeze act until she was 6½ months pregnant.

It was a different circus, not yet marginalized by charges of animal cruelty.

The Pharoahs performed for 18 years.

“It’s hard to believe he could do that when you saw him later on,” Trudy Strong said.

Yeah, it was a different era all right. Bill Strong had taken up smoking when he was, no joke, 9.

It caught up to him.

He developed chronic obstructive pulmonary disease, a fancy way of saying he had a double-whammy of emphysema and bronchitis.

His coughing ultimately ended the act.

“You can’t cough when I’m hanging by my toes,” Trudy Strong remembers telling him.

In accordance with his final wishes, half of Bill Strong’s ashes are to be scattered on a farm near Tremont City they once called Circus Farms.

It was as much a farm as circus peanuts are legumes.

Owned by Bill and Trudy for almost 20 years, it was a place where show folks could lay off between dates for a day, a night or even a week.

It wasn’t uncommon to see elephants in the yard.

“He loved it there,” she said. “It’s where we had some of our better years.”

The other half is to be scattered in Gibsonton, Fla., the famed circus town he and Trudy called home in recent years.

Trudy left it up to her husband how to divide the ashes.

“I asked, which part do you want here?”