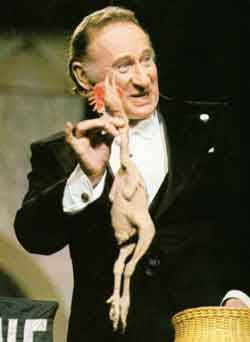 Carl Ballantine dies at 92; comedy-magician was in 'McHale's Navy' cast

The performer appeared on many other TV shows, in movies and in Las Vegas.

Carl Ballantine, the "amazing" comedy-magician and character actor who was part of the World War II PT boat crew on the 1960s sitcom "McHale's Navy," has died. He was 92.

Ballantine died in his sleep of age-related causes Tuesday at his home in the Hollywood Hills, said his daughter Saratoga Ballantine.

As an actor, Ballantine was best known for playing the supporting role of crew member Lester Gruber on "McHale's Navy," the popular 1962-66 series that starred Ernest Borgnine.

"He was a natural; everything to him had humor," said Tim Conway, who played the bumbling Ensign Parker on the show, where he first met Ballantine.

"I only knew him from seeing him on 'The Ed Sullivan Show,' which I thought was the funniest thing I ever saw, the magic act that wasn't working," he said.

Indeed, it's as a comically inept magician variously billed as "The Amazing Ballantine," "The Great Ballantine" and "Ballantine: The World's Greatest Magician" that he made his biggest impact as a performer.

In 2007, Steve Martin presented Ballantine with the Lifetime Achievement Fellowship from the Magic Castle in Hollywood.

"Carl Ballantine influenced not only myself but a generation of magicians and comedians," Martin said Wednesday in a statement to The Times. "His was also the most copied act by a host of amateurs and professionals."

"Basically, Carl Ballantine created comedy magic," he said. "The combination of magic and comedy had perhaps been done before, but he truly defined it and made it his own."

Beginning in nightclubs in the early 1940s, the tall and lanky Chicago native would walk out on stage in top hat, white tie and tails.

"If the act dies, I'm dressed for it," he'd tell his audience, and he was off and running with a satirical magic act that conjured up laughs rather than amazing feats of sleight of hand.

At one point in his act, he'd tear a newspaper page into strips, boldly claiming that he would restore the paper to its original state. Then he'd stop to read the want ads.

Ballantine performed at the legendary Palace Theatre in New York and in Las Vegas in the 1940s.

He later took his act to television, appearing on a host of programs, including the Garry Moore, Andy Williams, Danny Kaye and Dean Martin shows, as well as "The Hollywood Palace" and "The Tonight Show."

Born Meyer Kessler in Chicago on Sept. 27, 1917, Ballantine learned his first magic tricks from his barber at age 9.

He was performing straight magic with poker chips, playing cards and money in an act called the River Gambler in 1940 when he underwent a career reassessment.

"The act wasn't successful in nightclubs," he told Hyla M. Clark, author of the 1976 book "The World's Greatest Magic."

"I had to make a living, so I looked at myself in the mirror and said, 'You don't look much like a magician.' Then I put this other thing together."

The other thing, Clark wrote, "soon became one of the most successful of contemporary magic acts."

Exempt from military service during World War II because of back trouble, Ballantine entertained the troops in England.

He performed his act for the last time at the "It's Magic" show at the Kodak Theatre in Hollywood last fall, his daughter said. "To great acclaim, I might add. His timing was still fantastic," she said.

He was a regular cast member on the 1969 sitcom "The Queen and I" and the 1980 sitcom "One in a Million." And he made guest appearances on numerous other series, sometimes appearing as a magician; he showed up on "Fantasy Island" as the Great Zachariah, on "Night Court" as the Fabulous Falconi and on “The Cosby Show” as the Great Ballantine.

He also did occasional cartoon voice-overs and hundreds of voice-overs for commercials, including one for the California Raisins in which he voiced the Raisins' talent agent, a Claymation character that resembled him.

In addition to his daughter Saratoga, he is survived by another daughter, Molly; and his sister, Esther Robinson.

Instead of flowers, the family requests donations be made to Used Pets, 517 W. Buckthorn, Inglewood, CA 90301.

No funeral will be held.

"He wanted to have his ashes scattered over Santa Anita racetrack," said Saratoga Ballantine, who was named after the racetrack in New York; her sister Molly's middle name is Caliente, after the track in Tijuana.

"He loved the ponies," she said.
dennis.mclellan@latimes.com

I loved this Real Comedian. He had me in stitches every one of countless times. I'll miss him; I'll never forget him.